With Thursday’s 2%+ rally, followed by Friday’s 2%+ decline, and now today’s 2%+ rally, the S&P 500 tracking ETF (SPY) has now rallied or declined 2%+ for the third straight day.  Since SPY’s inception in the early 1990s, the current streak is the 26th time that the ETF has been up or down 2%+ for three straight days (and the second this year).  Of those 25 prior streaks, eleven extended to a fourth day, so while 2% moves aren’t especially common (less than 8% of all trading days), when SPY has 2%+ daily moves for three straight days, there has been a 2%+ move the following day 44% of the time.  There’s a saying in markets that strength begets strength; a corollary to that phrase would be volatility breeds more volatility.  Of the five streaks that lasted at least five trading days, one was in July 2002, three were in 2008 (September, October, and December), and the most recent, which ended up being the longest on record was in March 2020. 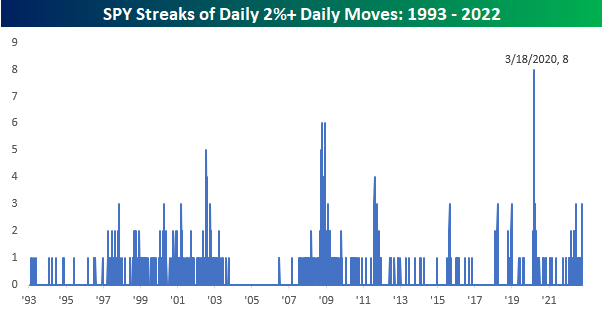 While we’ve experienced a short burst of volatility in the last few days, SPY’s average daily move recently hasn’t been particularly extreme.  Over the last 50 trading days, SPY has averaged a daily move of +/-1.25%, which while well off its lows from early September, is still well below the levels seen back in June.  For all the talk about why the VIX hasn’t seen a major spike, one big reason is that we have yet to see a meaningful uptick in day-to-day volatility. Click here to learn more about Bespoke’s premium stock market research service. 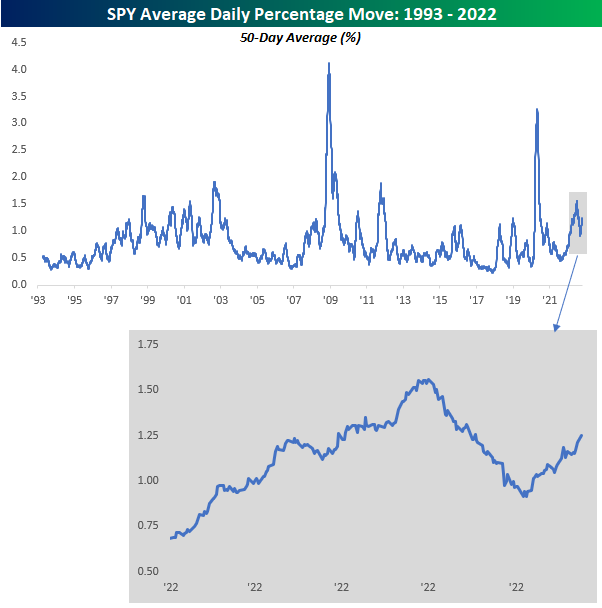