In spite of a busy earnings slate, it has so far been a boring session with the S&P 500 fairly flat up only a few basis points on the day ahead of the FOMC’s rate decision.  Performance today is more or less going along with the historical performance on Fed days.  In the first chart below we show the median intraday performance of the S&P 500 on Fed days going back to the mid-1990s. Times in which rates have been held steady, as is expected today, have happened the most often. Similar to today, these days normally see the S&P 500 up just a few bps throughout the morning before ramping up headed into the FOMC decision around 2 PM ET. Some of those gains then get erased in the final hour of trading. 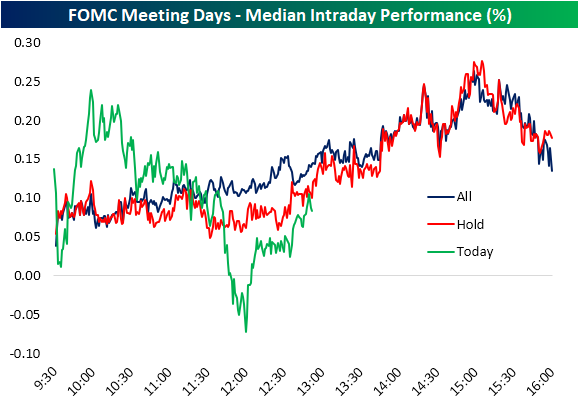 As for during Powell’s tenure, it has been another story.  Again on a median basis the S&P 500 trades slightly higher during the morning although in the early afternoon there is a drift lower.  While there has been a pop on the immediate release of the decision, usually around the time of the presser through the end of the session, the S&P 500 has tended to decline.  In fact, the median decline in the S&P 500 by the end of the day has been 14 bps during Powell’s tenure.  Over just the past year, we’ve still seen late-day weakness but the market has still managed to close in the green.  Click here to view Bespoke’s premium membership options for our best research available. 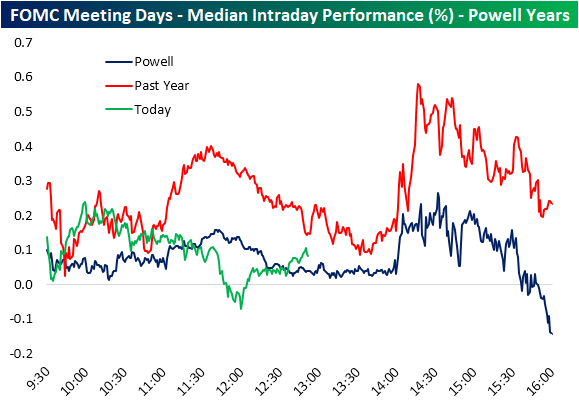