In terms of the US equities space, the Tech heavy Nasdaq 100 (QQQ) drastically outperformed closing out June with a 16.91% gain in the first half.  In Q2 and June, it was also the best performing major index by a wide margin.  On a sector basis, Technology (XLK), Energy (XLE), and Consumer Discretionary (XLY) all rose over 30% in Q2 just like the Nasdaq did, though their first half and June returns were more modest with the exception of the Tech sector whose returns were more in line with that of the Nasdaq.

Investing based on market cap saw some interesting dynamics as well. Even though small caps are some of the major US indices down the most on the year—S&P 600 Small Caps (IJR) are down 17.89% and the Russell 2000 (IWM) is down 12.96% YTD—there was some catch up in June as these indices were some of the best performers.  That applies to both growth and value names though small cap value (IJS) is still one of the most beaten-down groups in the US equities space.  On the other hand, large-cap growth (IVW) offered the strongest returns in June, Q2, and the first half when compared to the various other style ETFs.

Outside of the US, even with big gains in June, countries like Brazil (EWZ), France (EWQ), Italy (EWI), and Spain (EWP) remain down big on the year.  Click here to view Bespoke’s premium membership options for our best research available. 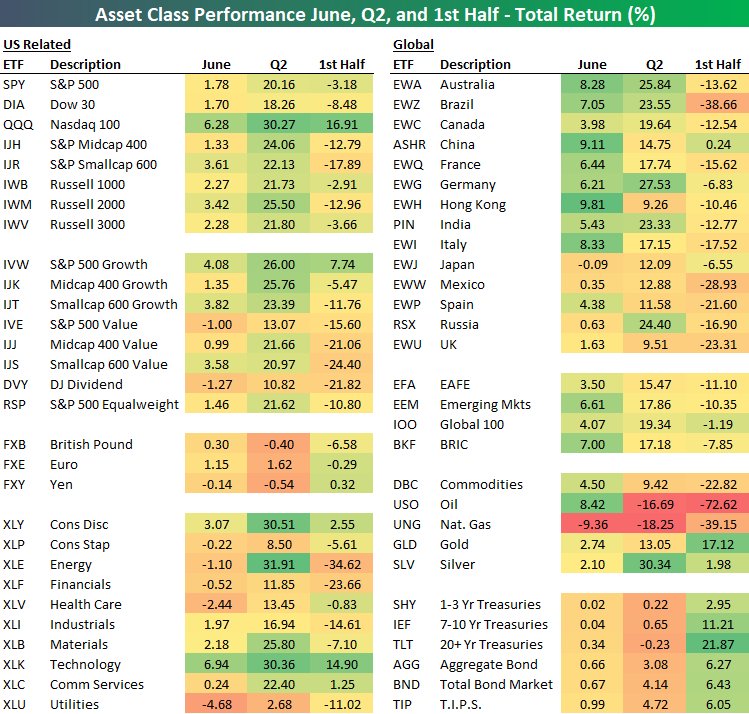