The New York Federal Reserve released its July reading on the manufacturing sector this morning and for the first time since February, the headline index indicated that activity rose month-over-month in the region.  Not only was it the first expansionary reading (those above 0), but at +17.2, it was also the highest level of the index since November 2018 when it stood at +21.1.  This month also marked a third consecutive monthly increase.

Although the index for present conditions is showing some of the strongest levels of the past couple of years with another uptick in July, optimism for the next six months pulled back.  The index for general business conditions six months in the future fell to 38.4 from a multi-year high of 56.5 in June.  That 18.1 point decline was the largest since March’s 21.7 point decline and the ninth-largest decline of all months.

While the pickup in activity was not as large as last month, for multiple individual categories the gains were still in the 90th percentile or better of all periods.  Conversely, the declines in the indices for expectations for General Business Conditions, New Orders, and Shipments were all in the bottom decile of all readings.  This month’s report also marked a turn for a few components as they changed from contractionary to expansionary. This was the case for the indices for General Business Conditions, New Orders, and Number of Employees. Now more than half are expansionary. 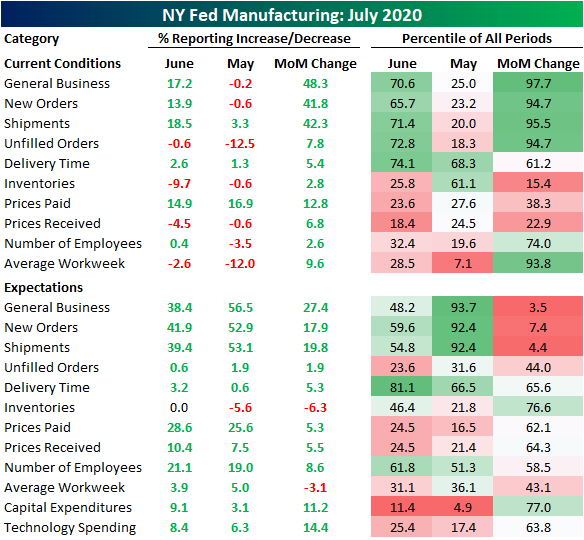 The two indices that rose the most this month were those for New Orders and Shipments.  For the index for New Orders, it was the first non-contractionary reading since February, and for Shipments, it marked back to back readings above 0.

One major positive of this month’s report was the reading on employment.  After four straight months of a greater share of manufacturers reporting decreases in employment, July marked an equal share of companies reporting an increase in employment as a decrease (21.9%). Additionally, the reading for future expectations rose to its highest level since August of last year indicating companies are at least expecting to increase hiring in the near future. Although employment was stabilized, average workweek did continue to fall, albeit, not by as much as previous months.  Start a two-week free trial to Bespoke Institutional to access our interactive economic indicators monitor and much more. 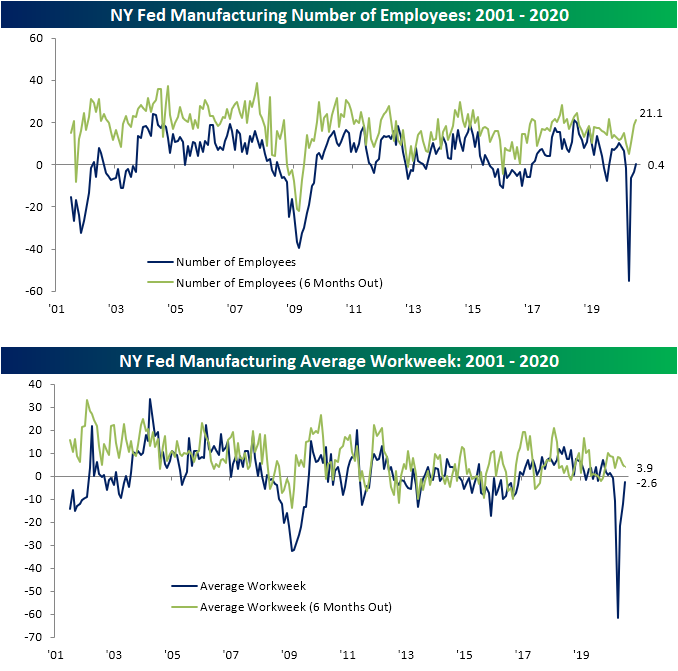