First and Second Day of The Quarter Volatility

It’s only been two trading days, but Q4 has already started off on a volatile note. On the first day of the quarter last Friday (10/1), the S&P 500 rallied 1.15%.  Today, though, last Friday’s gains have been more than erased as the S&P 500 is down 1.2%. A rally of more than 1% on the first trading day of a quarter is not that uncommon as it has happened just over 20% of the time since 1990. Since 1990, though, this quarter is on pace to be just the third time that a quarter has started with a 1%+ gain only to be followed by a 1%+ decline. The first occurrence was at the start of Q3 in 2000 just after the dot-com bubble burst.  The only other occurrence was just over two years later at the start of Q4 2002 just as the 2000 – 2002 bear market was ending.  Given the small sample size and the completely disparate paths of the S&P 500 following both periods, there’s really not much you can read from these two occurrences except perhaps that they were both periods of extreme volatility for the equity market. 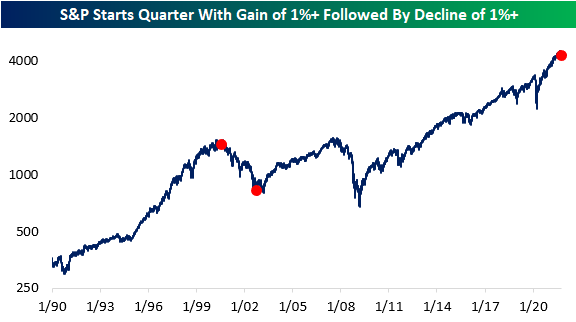 As far as the inverse situation is concerned, there are more occurrences when the S&P 500 dropped 1% on the first day of a quarter only to rally 1%+ the following trading day. Since 1990, this has occurred seven times. Occasionally, this signifies the bottom of a market pullback, such as April of 2020, April of 2018, October of 2011, and October of 1998. Click here to view Bespoke’s premium membership options. 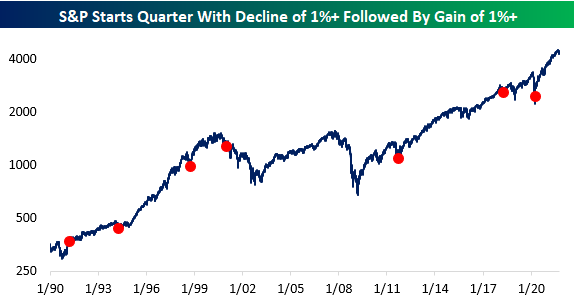