It only took over two years, but the Russell 2000 finally put in a new all-time high on Friday. As shown in the charts below, Friday marked the first all-time high on a closing basis since August 31st, 2018; a total of 553 trading days between highs.  As shown in the second chart below, since the index began trading in the late 80’s, that makes for the third-longest stretch without a new high. The only two longer periods were from March 10th, 2000 through April 2nd, 2004 and from July 16, 2007 through April 26th, 2011. Both of those streaks were nearly twice as long as the past two years’ streak. 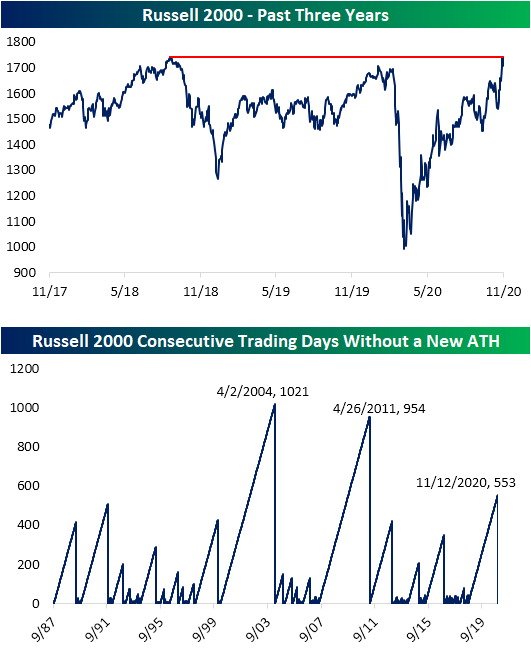 The Russell 2000 is up another 2% to more fresh highs this morning, but the recent move to new highs has left the index very overbought. As shown in the snapshot of our Trend Analyzer below, at Friday’s close small caps like the Russell 2000 (IWM) and Core S&P Small-Cap ETF (IJR) are two of the most overbought major index ETFs after having seen some of the strongest performance over the past five days.  Granted, as other large-cap indices like the S&P 500 (SPY) and Nasdaq (QQQ) were quicker to return to all-time highs earlier this year making them some of the stronger performers on the year, small caps have been laggards on a year to date basis. In other words, this year’s weakest performers have been a factor in recent strength.  Click here to view Bespoke’s premium membership options for our best research available.