As we noted in our update of our Five Fed Manufacturing Composite featured in last night’s Closer, July regional Fed manufacturing indices have been showing broadly strong readings. The fifth and final Fed bank’s index released today out of, coincidentally enough, the fifth district added some fuel to the fire.  The Richmond Fed’s composite reading was anticipating a 2 point decline from 22 last month. Instead, last month’s reading was revised higher by 4 points, and July saw another uptick to 27. That is the second-highest reading on record behind March 2008 when the composite came in a single point higher. 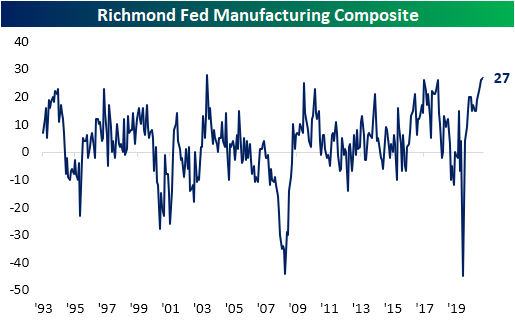 While the composite index as well as multiple other sub-indices like those for employment, prices, and inventories were at or just off of records, breadth in terms of the month-over-month changes was more mixed.  Of the 17 sub-indices, 9 were higher, 1 was unchanged, and 6 were lower. 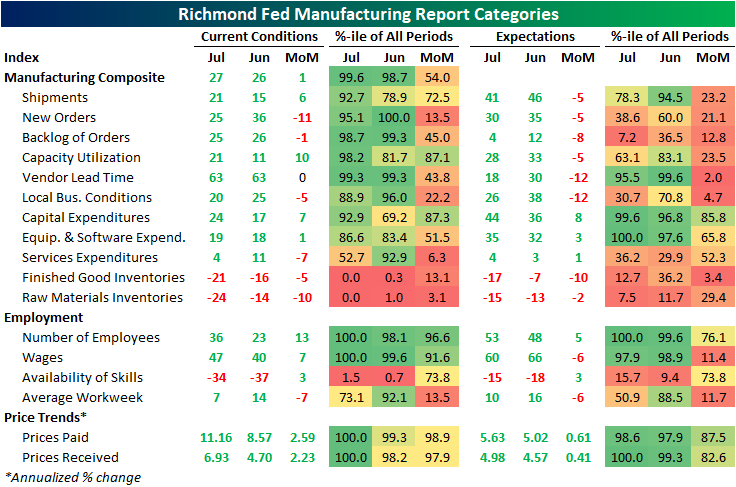 The area of the report to have seen the most significant deterioration in July was New Orders.  The index fell 11 points to 25. Granted, that is coming off of a record high, and the July reading remained in the top 5% of all months. Order Backlogs also fell m/m although the decline was much smaller at only a single point.  One interesting dynamic of the readings on Backlog of Orders is the difference between current conditions and expectations. Whereas the current conditions index is in the top 2% of all readings, the expectations component saw an 8 point decline and is now in the bottom decile of readings.  Overall, while order growth decelerated, it is still running at a very strong clip.

As such, shipments were higher with that index rising 6 points to 21; the highest level since March. While shipments rose, there still appear to be significant disruptions to supply chains.  Vendor Lead Times were unchanged in July just off of the record high from two months ago.  While that reading has yet to see much improvement, the region’s businesses do seem optimistic that the lead times will improve but not necessarily return to normal down the road as expectations plummeted 12 points. 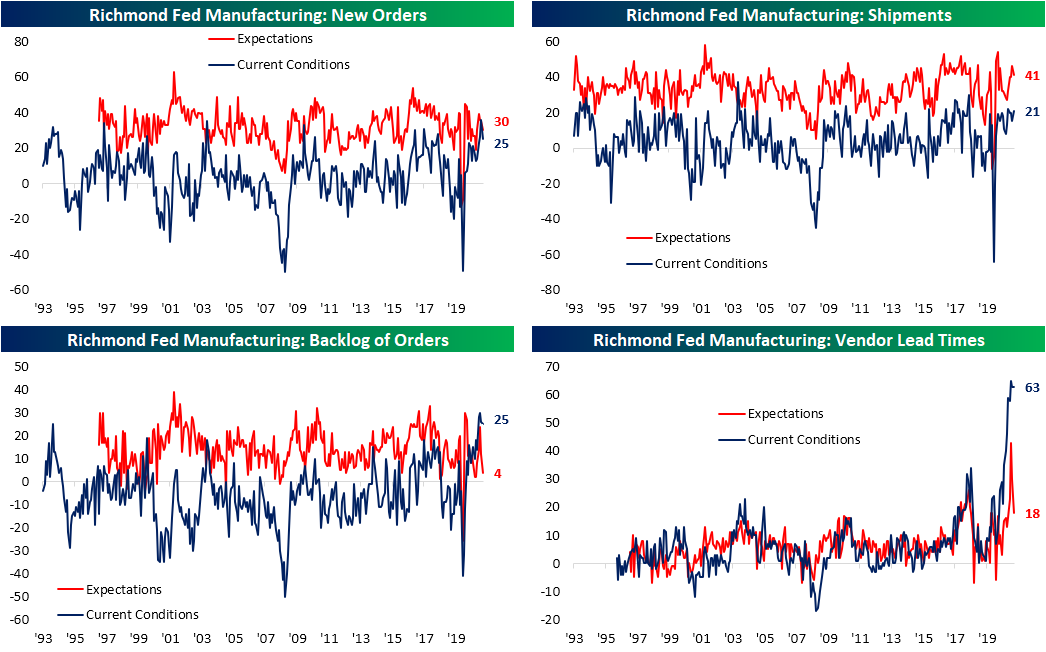 Given those supply chain disruptions, inventories continue to decline at record rates.  The indices for both raw materials and finished goods fell to fresh record lows. 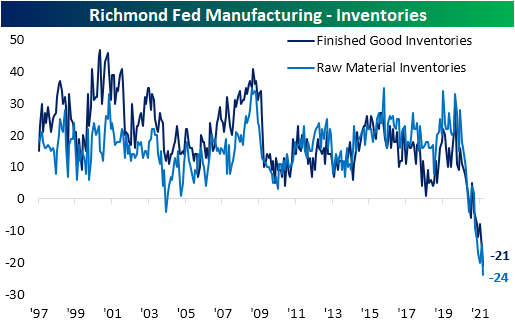 Meanwhile, unlike other regional Fed reports, prices paid have gotten little relief accelerating to an 11.16% annualized rate. Prices Received also rose to a record high of 6.9%. 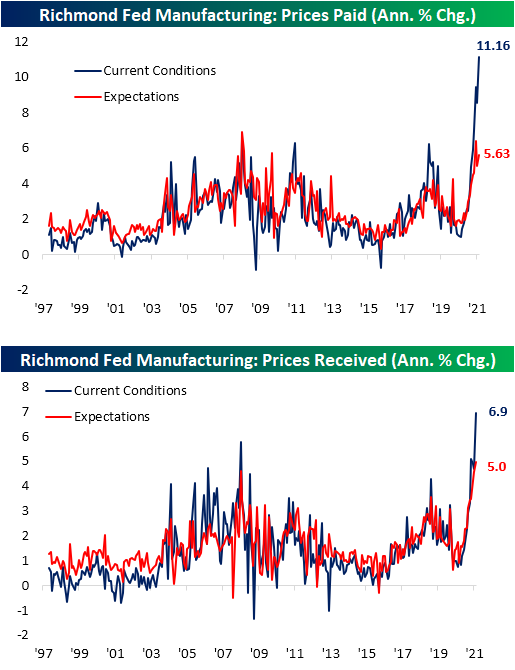 In addition to input and final good prices, wages also came in at a record high alongside the index for Number of Employees.  Forward-looking indicators point to continued strong labor demand going forward too as expectations for the Number of Employees also set a new record. Granted, that did not coincide with a record in the reading on wage expectations. In other words, higher pay has appeared to have enticed more workers but we are potentially hitting a limit on firms’ willingness (or ability) to pay higher wages.  Additionally, alongside the higher wages and an increase in employment, there was an improvement in the Availability of Skills index which has been around record lows of late (meaning there has been a lack of candidates with necessary skills).   Click here to view Bespoke’s premium membership options. 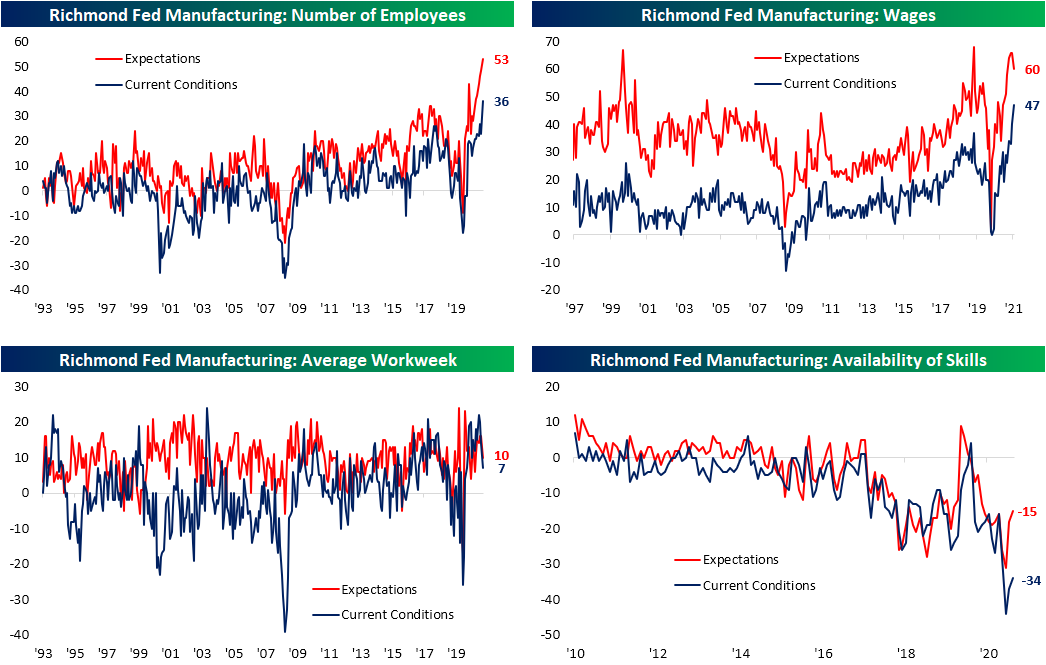