At the moment, of the S&P indices based on market cap, only the S&P 500 is currently above its 50-DMA. Meanwhile, the S&P Mid-Cap 400 is trying to move back above and the small-cap S&P 600 is around 3.5% below its 50-day and moving lower.  As for the individual stocks of these indices, it is more or less the same story.  The S&P 500 has the strongest percentage of stocks above their 50-DMAs at 56.44%. That is down though from a high of 68.91% at the end of last week.  Mid and small caps are even weaker with only 36.5% of the S&P 400 above and less than 30% of the S&P 600 above.  While this week saw legs lower in the percentage of stocks above their 50-DMAs for each of these indices, we would also note that recent readings are also well below very strong levels that had been observed from late last year through this past spring.

The same goes for the percentage of stocks above their 200-DMAs. For each of these market cap indices, readings around 90% were commonplace for most of the past year, that is, until the past few months and more specifically the past week. Roughly three-quarters of S&P 500 stocks closed above their 200-DMAs yesterday which is the lowest level since early November. Again, that also applies to mid and small caps which have even smaller shares of stocks above their 200-day moving averages at 65.99% and 60.17%, respectively.  Click here to view Bespoke’s premium membership options. 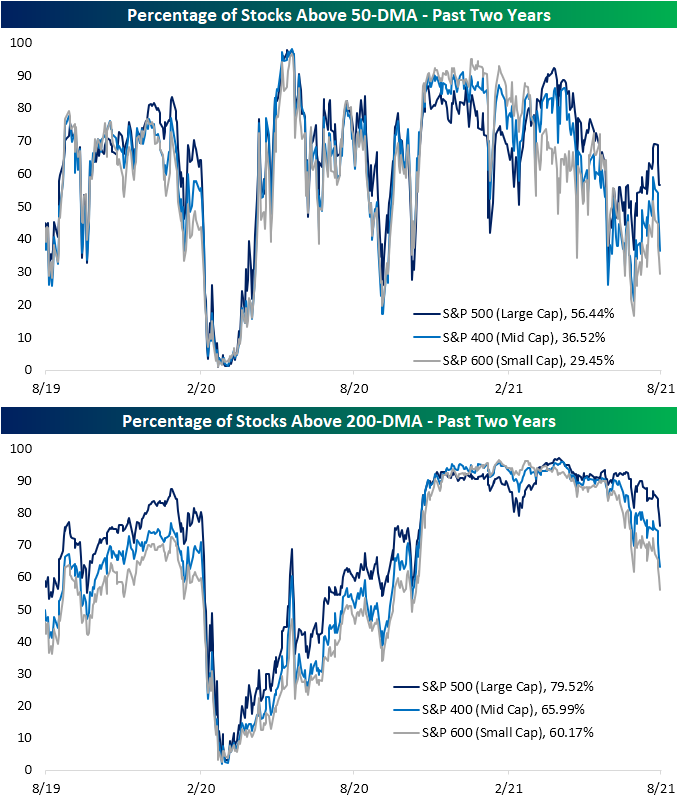