With elevated COVID cases and a major winter storm that paralyzed much of the south, February was a speed bump for the US economy.  The latest example comes from this morning’s release of the Chicago Fed National Activity Index (CFNAI).  From the website of the Chicago Fed, “The CFNAI is a weighted average of 85 existing monthly indicators of national economic activity. It is constructed to have an average value of zero and a standard deviation of one. Since economic activity tends toward trend growth rate over time, a positive index reading corresponds to growth above trend and a negative index reading corresponds to growth below trend.”

The release for February showed considerable weakness falling from a strong reading of 0.75 in January to -1.09 in February.   The chart below shows historical readings of the CFNAI index dating back to 1970 with recessions highlighted in gray and a red line indicating the current reading for February.  Because of the major swings we saw in this index around the COVID outbreak last year, this chart is pretty useless in terms of looking at the current data to see how it compares to prior periods.

In order to get a better view, in the chart below we have cut off the y-axis to leave out the extreme readings from 2020.  Looking at it this way shows just how weak February was.  Looking back, just about every prior occurrence where the CFNAI was below -1 the US economy was in a recession.  Besides the period in 2020, the last times this index was at similar levels was during the Financial Crisis, during the dot-com recession, the 1990 recession, and then the double-dip recession of the 1980s.  Noticing a trend?

The table below shows every month where the CFNAI was less than negative one (-1). Since 1970, out of 612 monthly readings, there have only been 37 months that the index was below -1.  Of those 37 months, there have only been two (Jan 1978 and April 1979) that occurred when the US economy wasn’t in a recession.  Technically, since the NBER has yet to confirm an end date, the US economy remains in the COVID recession, but most would agree that when the time comes, the recession will likely have ended in the second or third quarter of 2020 which would make February just the third month since 1970 that the CFNAI was below -1 outside of a recession.  In other words, in just about any other time but now, an overheating economy would be the last thing people would be worried about right now given a negative reading of this magnitude in the CFNAI.  Click here to view Bespoke’s premium membership options for our best research available. 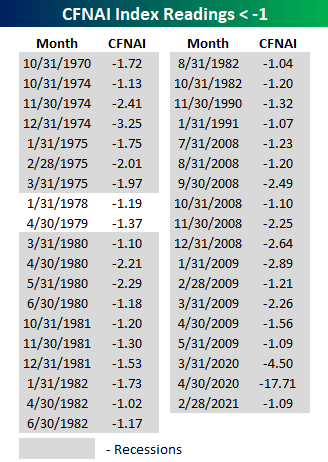