The ten members of the NYSE FANG+ index went on an epic run in the mid to late–2010s that many thought was “bubble” like at the time.  From early 2016 to mid-2018, the FANG+ stocks went up 200%.  After peaking in June 2018, though, the FANG+ index fell nearly 50% before finally finding a floor.  After the big decline in late 2018, many investors moved on from the FANG trade, but now anyone that did is kicking themselves.

The FANG+ stocks went on another big run in 2019 and early 2020 only to collapse 34% during the one-month COVID Crash in late February and early March.  Since making its COVID-Crash low on March 18th, however, the FANG+ index has experienced one of the most remarkable runs that any investor can expect to see in their lifetimes.  As shown in the second chart below, the FANG+ index is up more than 60% over the last six months, and it has more than doubled since its March 18th low.  Those prior highs made back in 2018 are now a distant memory with the index now ~85% above that level.  Click here to view Bespoke’s premium membership options for our best research available. 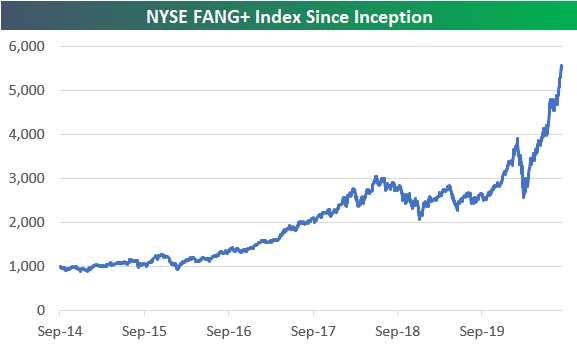 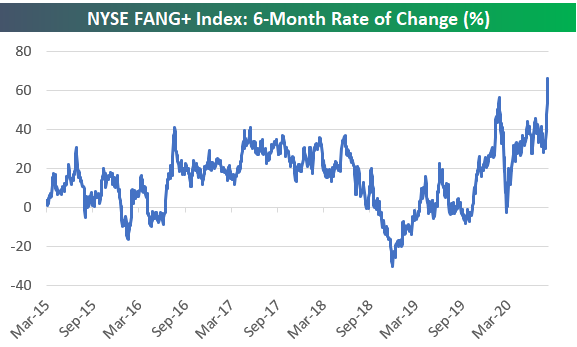 Below we compare the NYSE FANG+ index since its inception in 2014 to the S&P 500.  The performance disparity continues to get wider and wider with the FANG+ index up 455% and SPY up 74% over the same time frame. 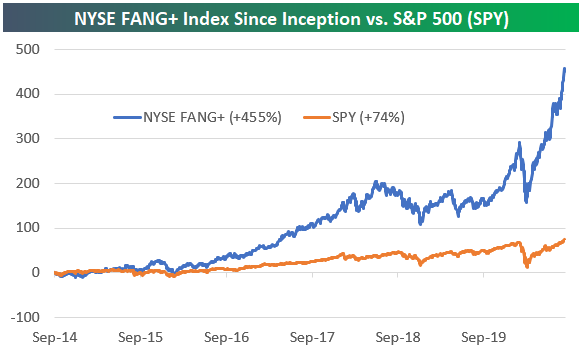 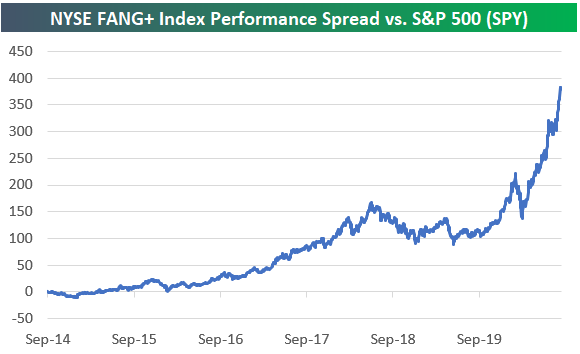 The NYSE FANG+ index is made up of the four FANG stocks (FB, AMZN, NFLX, GOOGL) plus six additional names that have certainly contributed their fair share to the index’s performance.  Stocks like NVIDIA (NVDA), Apple (AAPL), and Tesla (TSLA) stand out the most, with Tesla of course being the most epic winner of them all.  Year-to-date, TSLA is up 435%, and it’s now 50% above its 50-day moving average.  If you’d like to track the FANG+ stocks or any other portfolio of your choosing, you can do so with our Custom Portfolios tool on our website.  Simply start a two-week free trial to Bespoke Premium or Bespoke Institutional to gain access to our Custom Portfolios tool and the rest of our popular Interactive Tools.  You’ll also gain access to a rich library of equity research to keep you on top of the market.