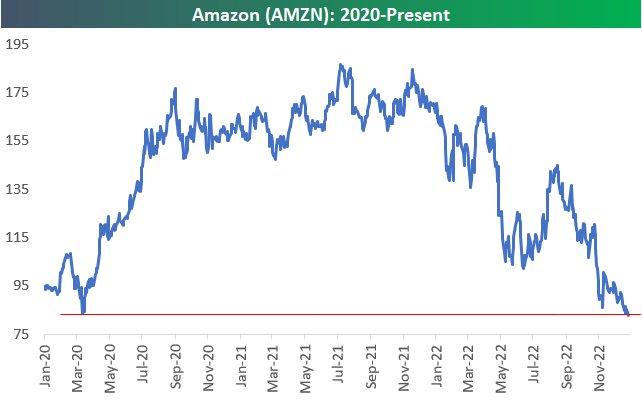 NYSE’s FAANG+ index is described as an index of “10 of today’s highly-traded tech giants.”  Given that most of the FAANG+ stocks account for a massive portion of the market cap weighted S&P 500, they are an impactful group.  As shown below, the FAANG+ index peaked in early November last year and has dropped 46% since then. The drop more recently follows a failed breakout above the top of its downtrend channel as the index is now back to within 5% of this past November’s low. On a relative basis, the group has been underperforming the broader market for even longer with a high in February of last year. 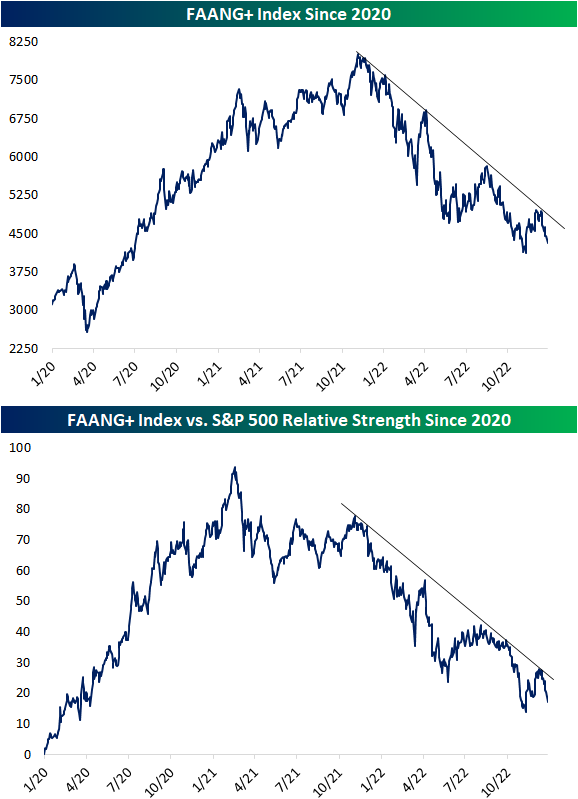 Below is a look at the ten FAANG+ stocks.  As shown, they came into the year with a combined market cap of $12.3 trillion, and they’re ending the year with a combined market cap of just over $7 trillion.  While Apple (AAPL) has fallen the least YTD in terms of share price change, it has lost the most in market cap at $844 billion.  Amazon (AMZN) has seen its market cap fall the second-most at $843 billion, essentially getting cut in half.  Tesla (TSLA), along with AMZN, is one of two names that lost their “$1 trillion market cap” club status this year.  TSLA is now down 69% on the year, and its market cap has fallen from $1.06 trillion down to just $344 billion.  The other FAANG+ stocks that are down 50%+ on the year include Meta (META), NVIDIA (NVDA), Netflix (NFLX), AMD, and Snowflake (SNOW).

With markets continuing to drop in these final trading days of December, on an absolute basis, 2022 is going to go down as the biggest year of wealth destruction ever for the US equity market.  In 2008, the Russell 3,000 saw its market cap fall by $6.7 trillion.  As of today, the Russell 3,000’s market cap has fallen about $11.2 trillion so far in 2022.  $5.2 trillion of that $11.2 trillion decline has come from just the ten FAANG+ stocks shown below. Click here to learn more about Bespoke’s premium stock market research service.