Fall of the Empire

One of the first big drops in US economic data showed its face today in the form of the first of the regional Fed indices covering the month of March.  The NY Fed’s headline reading on general business conditions experienced it largest drop on record in March, falling 34.4 points from 12.9 in February to -21.5.  That is the first negative reading since June of last year, but the lowest level of the index for current conditions since March of 2009 during the financial crisis.  Back then, the index remained below -20 for six consecutive months. Prior to then, the only similar readings can be found early in the survey’s history in November of 2001.

As for expectations six months out, this month’s reading of 1.2 is again the lowest reading since early 2009, and as with the current conditions index, you would need to go back to 2001 to find similarly low readings before that. The 21.7 point decline in expectations this month is also the largest one month decline since January 2009 when it dropped by slightly more (24.9 points). Overall, New York area businesses’ outlook in both the near term and further out have deteriorated dramatically in just one month.

Of the individual components, pretty much everything was weaker this month for both current conditions and expectations. Only two categories (expectations for unfilled orders and inventories) rose this month. Other than the headline index, the two categories who’s declines stand out the most, and likely drove the large declines for the headline number, are for new orders and shipments.  While other categories’ declines are much more modest by comparison, they too are significant nonetheless.

The index for new orders fell from 22.1 last month to -9.3.  This was slightly lower in June of last year when it had fallen to -9.7, but the 31.4 point month-over-month decline was the third largest on record behind October of 2001 (43.2 point drop) and November of 2010 (31.8 point drop).  With current demand drying up, expectations for the future are also weak as the index for expectations six months out fell to 17.6 from  27.5 in February.  While this does not draw parallels to the financial crisis like other aspects of this month’s survey, this is the lowest level since January 2016.

Given the weaker demand, the index for shipments has also come down a lot.  The current conditions index for shipments is in negative territory, -1.7, for the first time since October of 2016. The 20.5 point decline from last month is the largest decline since August of 2015. As for the forward looking indicator, conditions have not fallen off of a cliff in the same way, but are at the low end of the past several year’s range.  Now at 20.5, it is at its lowest level since only October.

Weekly jobless claims have been one economic indicator that have been closely watched over the past several weeks given their higher frequency and potentially more timely reading on the impacts of Covid-19 on the American workforce.  While nothing has shown up there, the NY Fed’s indices for number of employees and average workweek have turned lower. The index for number of employees has been significantly lower multiple times in the past few years making the drop to -1.5 nothing too crazy, but the 8.1 point decline was the largest in over a year.  Meanwhile, expectations for increasing the number of workers six months out is at its lowest level since 2017.  Not only are NY area businesses not taking on more workers, but the index for average workweek fell to -10.9 which is the lowest level since December 2015.  Start a two-week free trial to Bespoke Institutional to access our interactive economic indicators monitor and much more. 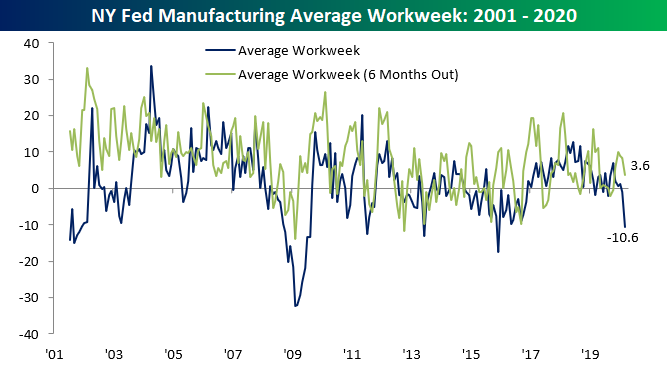