As equities continue to sell off, sentiment continues to tank in a broad sense.  That being said, there was actually a higher share of respondents to the AAII survey reporting bullish sentiment this week.  Coming off the lowest level since July 2020, bullish sentiment rose slightly and remains historically low at 23.1%. 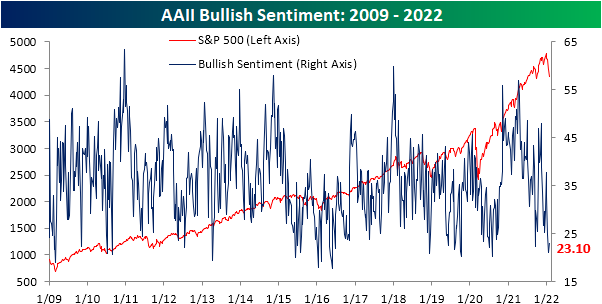 Bearish sentiment, meanwhile, has surged 22.4 percentage points in the past month with more than half of respondents falling in the bearish camp this week.  At 52.9%, it was the highest reading since the week of April 11, 2013. In other words, sentiment this week among survey respondents was more negative than even the COVID Crash.  In all weeks since the start of the survey in 1987, there have only been 40 other weeks with as high if not higher of a reading. 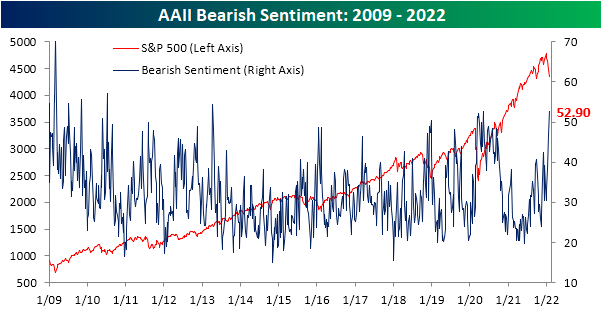 Given the massive increase in bearish sentiment, the bull-bear spread has also outright collapsed. At -29.8, bears outnumber bulls by the widest margin again since April 2013. 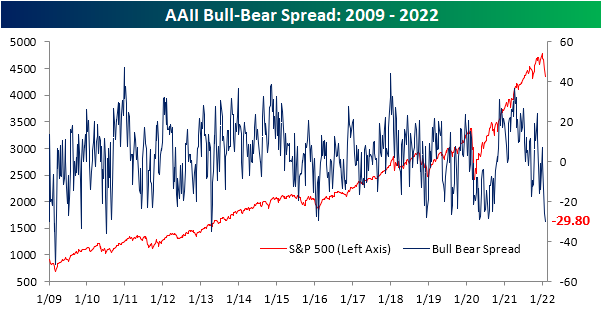 Given bullish sentiment was actually higher as bears surged, the difference came from a big drop in neutral sentiment. Neutral sentiment fell by 8.4 percentage points to 23.9%.  That is only the lowest neutral sentiment reading since the first week of September of last year, but it was the biggest week-over-week decline since November 2020. 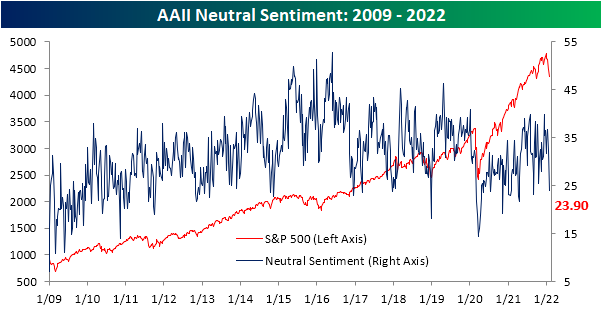 The AAII survey was far from being alone in indicating bearish sentiment.  The Investors Intelligence survey of newsletter writers saw the most bearish readings since the spring of 2020 and the NAAIM Exposure index also saw one of the more modest readings of the past year. Using all of these readings combined, we created our sentiment composite below to get a more general feel for sentiment across these indicators.  This week, that composite fell below -1 meaning on average sentiment indicators are a full standard deviation below (or in a bearish direction) their normal reading.   Of course, that was the first time such a reading has been observed since the COVID crash. 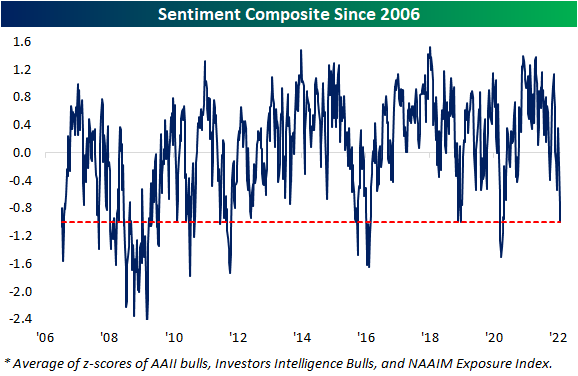 With data beginning in 2006, there have only been nine other times in which the sentiment composite has fallen below -1 for the first time in at least three months.  In the table below, we show those instances and how the S&P 500 has performed going forward. Overall, that bearish sentiment proves to be correct in the next week as the S&P 500 has declined two-thirds of the time. One month to one year later, though, returns have been biased to the positive side with positive returns at least two-thirds of the time.   Click here to view Bespoke’s premium membership options. 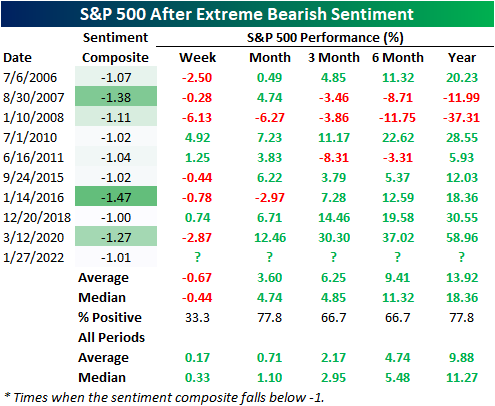