Just when we thought earnings results couldn’t get much better when it comes to beating consensus analyst estimates, the results so far this earnings season have been stronger than ever.  Through last Friday, 85% of the 271 companies that had reported Q3 results beat consensus bottom-line expectations.  That’s more than 25 percentage points above the average beat rate of ~60% seen over the last twenty years.

The top-line beat rate for revenues has been almost as strong at 78%, while the percentage of companies raising guidance (17%) is higher than we’ve ever seen.

Share-price reactions to earnings haven’t been as strong as beat rates, but the numbers are still positive.  So far this season, the average stock that has reported has gained 0.55% on its earnings reaction day (the first full day of trading after the earnings release).  To get to that +0.55% full-day gain, the average stock has actually opened higher by 0.97% and then sold off by 0.44% from the open to the close of trading.  So while we’re seeing stocks gain in reaction to earnings, underneath the surface we’ve seen a stronger initial reaction to the news and then some intraday selling. 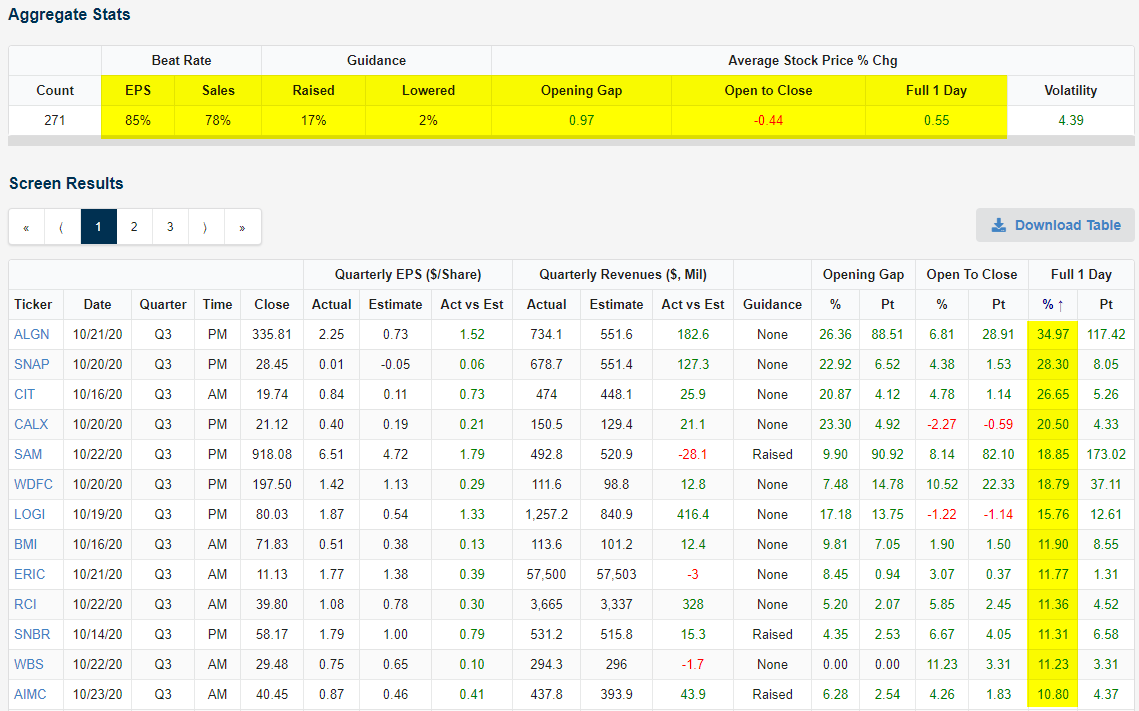 Over at Bespoke Premium, we provide clients with the beat-rate trackers below that highlight the rolling percentage of companies beating EPS and sales estimates over the last three months.  You can see the massive spike for the rolling 3-month EPS beat rate last earnings season that has ticked even higher so far this season.  The only times we’ve seen beat rates even remotely close to these levels were in the early days of the 2003-2007 bull market and the early days of the post-Finanical Crisis bull market in late 2009.  Back then, the EPS beat rate ticked up to the ~70% level, but again, we’re a full eight points higher than that now. 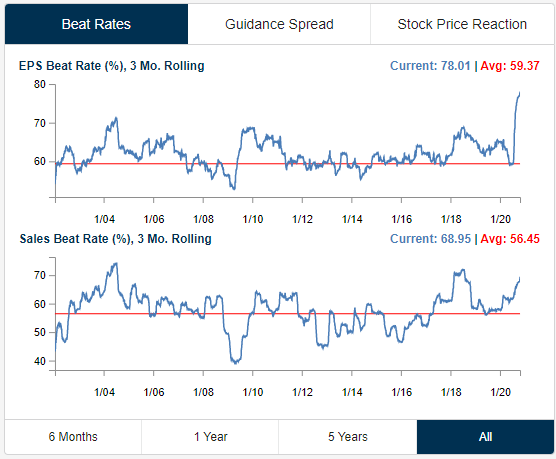 We’re seeing the same extraordinary trend when it comes to what companies are saying about their future prospects.  If you follow earnings releases closely, you know that forward guidance drives share-price reactions more than backwards-looking EPS and sales results.  Below is our guidance tracker that’s also available to Bespoke Premium clients.  This tracker shows the net percentage of companies that have raised guidance (vs. lowered guidance) over the last three months on a rolling basis dating back to the early 2000s.  Here again, the guidance spread spiked dramatically last earnings season in July and August, and it has gone on to tick even higher as this season’s results have started to come in.  There has never been a period at least in the last 17 years where companies have been this positive on their outlooks relative to prior expectations.  We’ve seen spikes before in early 2004, late 2009 and early 2018, but those periods look unexceptional compared to what we’re seeing now.  Click here to start a two-week free trial to Bespoke Premium.  You’ll start receiving our actionable research in your inbox immediately and gain access to investor tools like our Earnings Explorer referenced in this post. 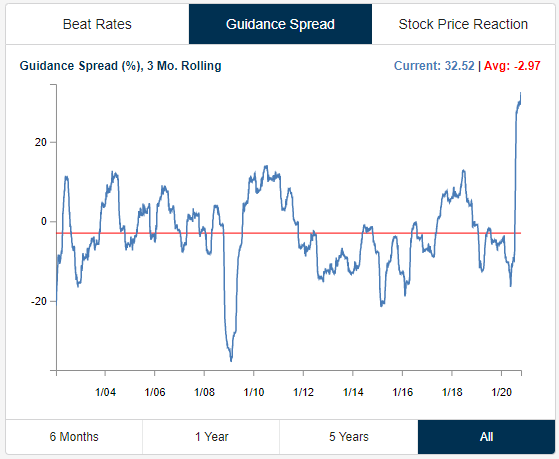