Manufacturing businesses in the New York area are roaring back to life this spring. After some readings showing only modest growth at the end of 2020 and at the start of this year, the New York Fed’s monthly manufacturing survey results released this morning showed the headline index rising to 26.3 which is the strongest level since October 2017.  That indicates the region’s manufacturing sector is growing at a rapidly accelerated rate. In fact, only 12.2% of businesses reported worse overall business conditions in April which is the lowest level in nearly a decade (since May of 2011). 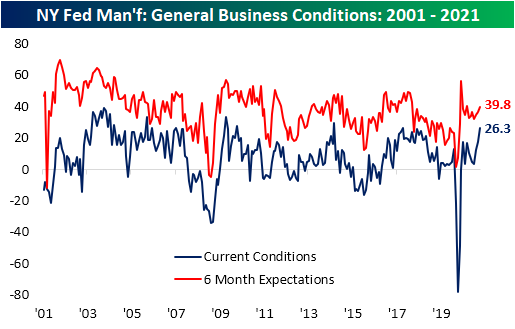 Given the strong reading in the index of General Business Conditions, every other area of the report also showed impressive readings.  For the current conditions indices, every index is in expansionary territory with higher month-over-month moves. Some of these like those for Delivery Times, Prices Received, Prices Paid, and Unfilled Orders are also at or just off record highs after massive moves higher in the past month.  Expectations generally remain positive although some indices are at less extreme places within their historical ranges while three of the indices were also lower versus March. 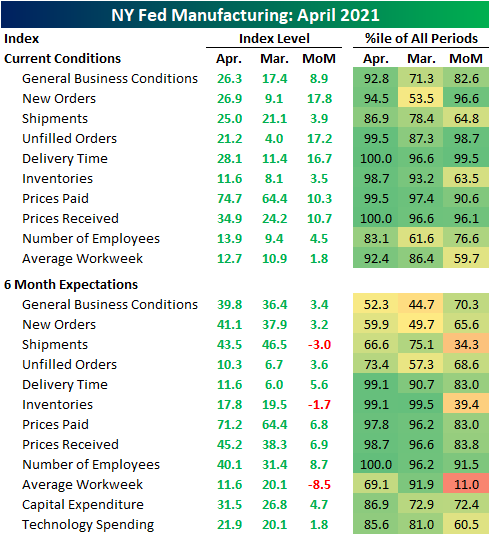 Beginning with a look at demand and production metrics, New and Unfilled Orders both surged in April rising 17.8 and 17.2 points, respectively. For New Orders, that month over month rise stands in the top 5% of all monthly moves and brings the index to its highest level since October 2009.  That compares to last month when the index was essentially in the middle of its historical range. Meanwhile, Unfilled Orders had been elevated even before this report, but with the most recent surge in New Orders, Unfilled Orders are now at the second-highest level on record behind the reading of 36.5 from September 2001 when the fulfillment of existing orders was likely impacted by the September 11th attacks.

While demand has been very strong, firms have seen no lack of trying to fulfill those orders.  Inventory levels were notably higher as that index rose to 11.6 which is in the top 2% of all readings and the highest since last February. The index for Shipments rose 3.9 points to 25 which is the highest level since August 2018. While that is a historically healthy reading, given the surge in unfilled orders and inventories it does indicate that the region’s manufacturers still have plenty of product to get out the door. 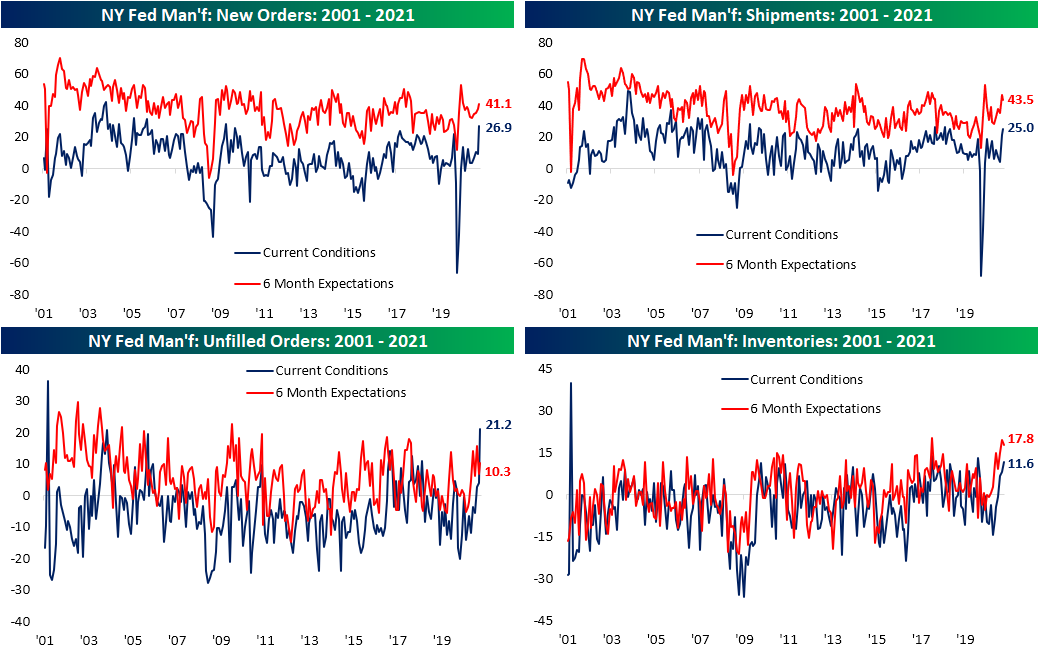 One likely reason for the weaker reading in shipments relative to orders and inventories is record length in delivery times.  That index not only experienced the second-largest increase of any month on record (behind September 2001), but it also reached the highest level ever. At 28.1, the index surpassed the previous record by 11.9 points. 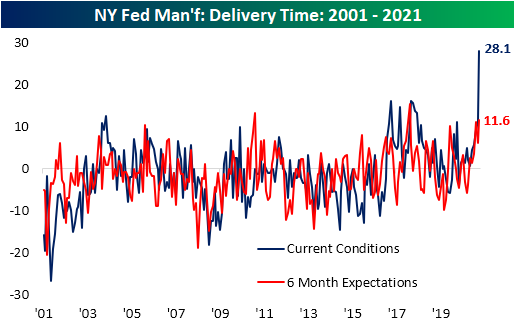 On top of—and likely because of—those supply chain disruptions, prices continue to rise at a record clip.  Prices Paid came in at the second-highest level on record behind July 2008. Those price increases are also being passed onto customers as Prices Received rose to a record high.  Additionally, businesses do not appear to see much of a chance for these trends to reverse as six-month expectations are also at very high levels. 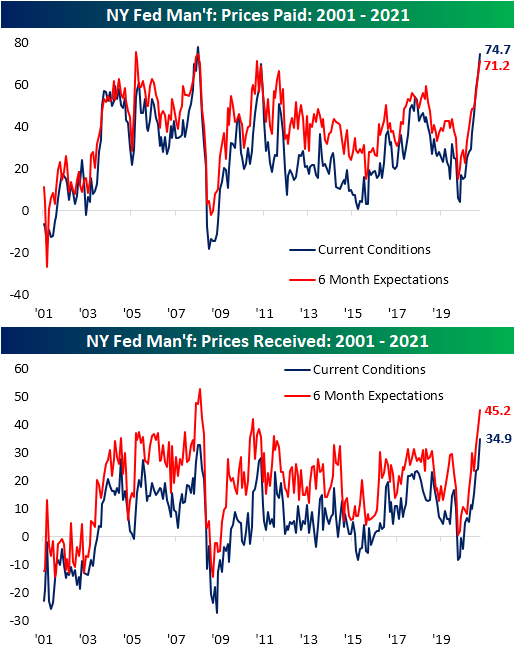 After a very strong nonfarm payrolls report at the start of the month and on the same day that initial jobless claims came in at a new low for the pandemic, this report also gave a rosy outlook for the labor market.  The index for the Number of Employees was higher alongside Average Workweek meaning businesses took on more employees and increased hours for existing workers, but the real move was in expectations.  Expectations for Number of Employees ripped higher to a new record of 40.1. That willingness to hire paints a very optimistic picture for the region’s labor market. 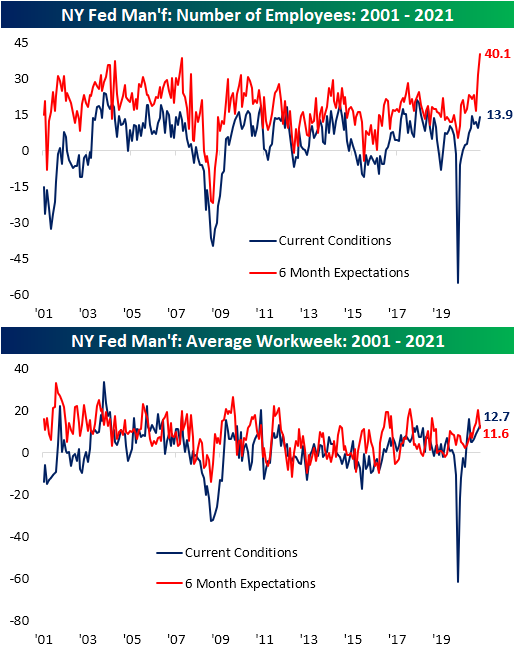 That sort of optimism extends beyond the workforce though.  Six-month expectations for Capital Expenditures and Technology Spending were also higher, rising to the top 15% of all readings. Click here to view Bespoke’s premium membership options for our best research available. 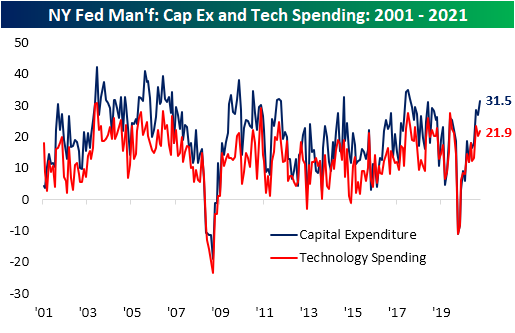