The newest EV IPO — Rivian (RIVN) — was down 15% today, but it still has a market cap of $125 billion, and it took only three trading days for the stock to close with a market cap of more than $100 billion.

Remember in the mid-2010s when Tesla (TSLA) bears complained about the company’s multi-billion dollar market cap even though it hardly had any revenues?  Well, the action in the EV space lately makes those prior Tesla complaints look laughable.

With Rivian (RIVN) now worth over $100 billion after just a few trading days and Tesla competitor Lucid (LCID) worth more than $80 billion, we wanted to highlight how long it took Tesla (TSLA) to trade at a similar market cap.  As shown below, it wasn’t until January 13, 2020 that TSLA’s market cap first crossed above Lucid’s current market cap, and TSLA didn’t cross above Rivian’s (RIVN) market cap until February 2nd, 2020.  While it took Tesla 2,407 trading days from its IPO to hit $100 billion in market cap, it only took three trading days for RIVN to do the same.

When Tesla first reached $100 billion in market cap in January 2020, the company had reported revenues of $7.4 billion in the most recent quarter.  RIVN and LCID, on the other hand, are still considered “pre-revenue” companies! 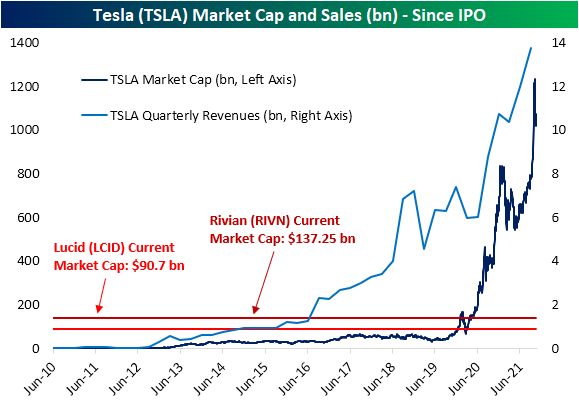 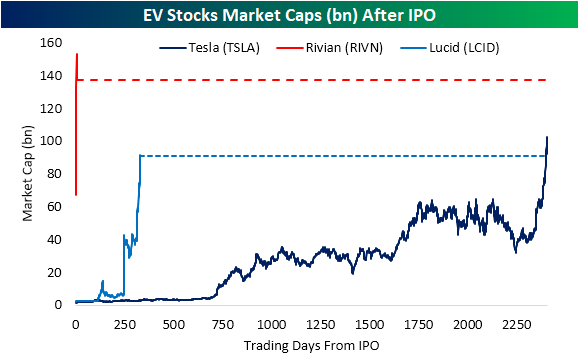 The rise of the electric vehicle is an overarching trend that consistently finds its way into the headlines. As shown below, Google Trends scores for terms like “Electric Car” and “EV” are approaching record highs and have more generally been grinding higher over the past few years with particular acceleration in 2020 and beyond. 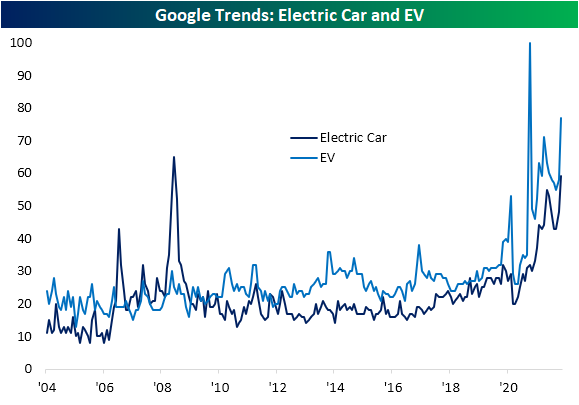 The past couple of months has seen plenty of EV stock headlines ranging from the surge in Tesla (TSLA) as it eclipsed a $1 trillion market cap and the strong IPO of Rivian (RIVN).  As a result of the strong performance of these stocks, looking at the largest global automobile manufacturers by market cap, EV names now have a significant presence. In fact, of a universe of 118 global auto stocks with market caps of at least $100 million (USD adjusted), 42% of the combined market cap is made up of four EV names—Tesla (TSLA), NIO (NIO), Lucid (LICD), and Rivian (RIVN). TSLA is of course the bulk of this with nearly a third of that total share, but Rivian (RIVN) is also high up on the list ranking as the third-largest of any single auto stock, and that is only after trading for a few days! 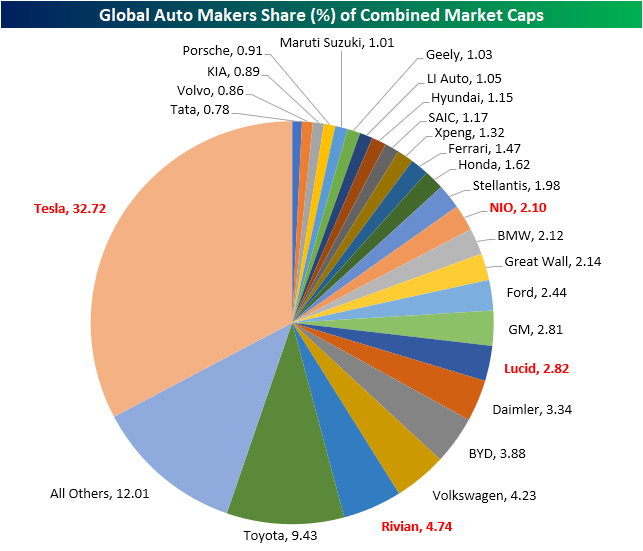 With that said, those valuations are pretty extreme when compared to sales (again USD adjusted).  In the chart below, we show the same stocks but as their share of the group’s trailing 12-month revenues.  As shown, the most legacy company of the EVs, TSLA, only made up for 1.9% of the industry’s revenues. NIO is the only other one with any sales to speak of. 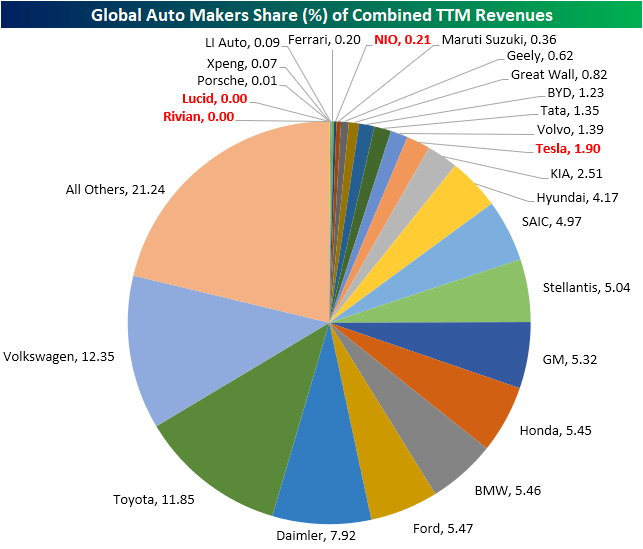 Obviously, there is a major disconnect between these stocks’ sales figures over the past year and their market caps.  Traditional automakers are bringing in far higher revenues than EV’s which for whatever reasons (rational or not) are not being reflected in market caps.  Click here to view Bespoke’s premium membership options. 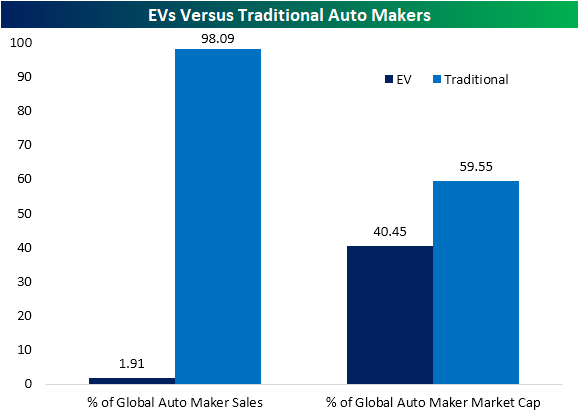