In the final weeks of the decade, equities around the globe have broken out to at least 52 week highs if not record highs as is the case for the S&P 500, and now the Eurozone Stoxx 600.

As shown in the first chart below, the Eurozone Stoxx 600 — priced in local currency (euros) — has finally made a new all-time high.  Even as the S&P 500 has more than doubled its pre-Financial Crisis high made in 2007, the Stoxx 600 has just recently managed to take out its 2007 high.  And this week the Stoxx 600 has taken out its 2015 high as well, which marks a significant breakout.  Notably, though, the 2015 breakout to new highs turned out to be a huge pump fake, and it has taken more than four years to get back to these levels. 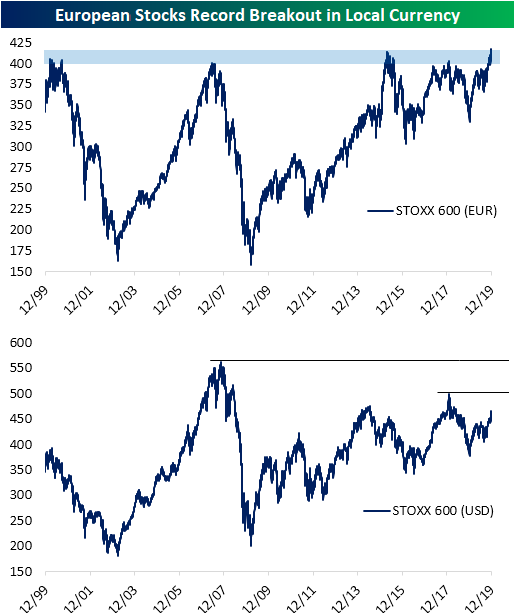 Below is a relative strength chart of the Stoxx 600 (Europe) versus the S&P 500 (US) over the last 20 years.  When the line is rising, it indicates European outperformance, while a falling line indicates US outperformance.  After outperforming the US for most of the 2000s decade, European stocks have massively underperformed the US for the last 10+ years.  When this period of underperformance comes to an end is anyone’s guess, but from a purely mean reversion standpoint, the Eurozone is about as due as it gets!  Start a two-week free trial to Bespoke Institutional to access our end of day macro report, The Closer, in addition to numerous other reports and interactive tools. 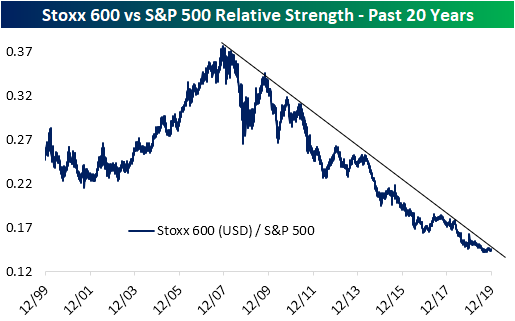