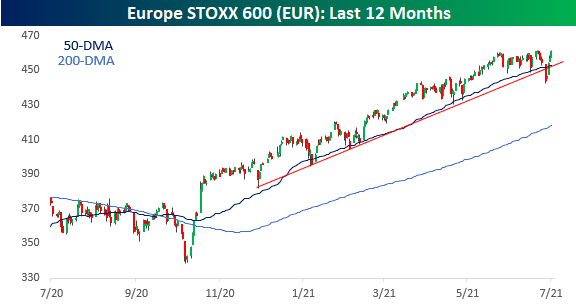 While European equities are right back at record highs this morning, from the perspective of a US investor, the picture doesn’t look nearly as bright. After a gap lower right after it traded at its last record high in mid-June, the STOXX 600 in dollar adjusted terms was hugging its 50-DMA for more than a month before breaking down earlier this week.  And while the STOXX 600 was quick to rebound back above its 50-DMA in local currency terms, on a dollar adjusted basis, it hasn’t gotten there yet. 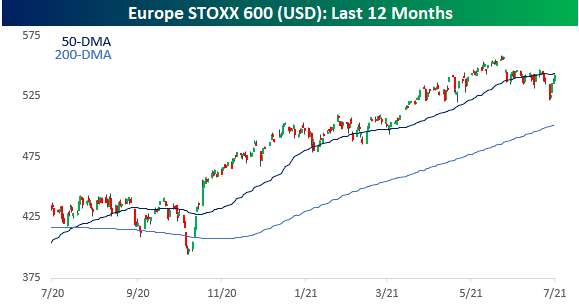 Obviously, the key culprit in the divergence between the performance of the two indices is the dollar. As shown in the chart of the US Dollar Index below, the last time the STOXX 600 was hitting new highs in mid-June, the dollar was right near 52-week lows.  After the June FOMC meeting, though, the Dollar spiked higher and has continued climbing ever since, and that is clearly acting as a weight on the performance of US investors’ international investments.  Click here to view and try out Bespoke’s premium membership options where we cover both US and international market developments. 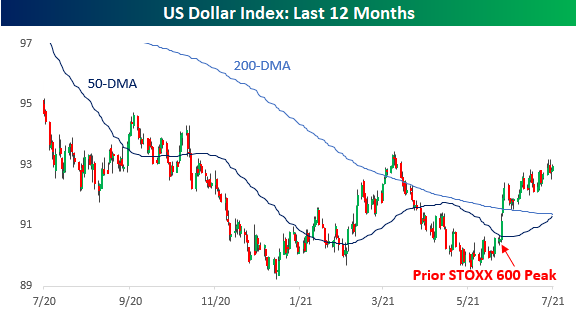