Ethereum Surges and Then Some

For many years, Ethereum may have felt like the ugly ‘step crypto’ to bitcoin, but like the swan in the fairy-tale, it has come into its own lately.  Just in the last two weeks its price has surged over 50%.  50% in two weeks!  Ethereum’s market cap currently clocks in at about $380 billion (compared to $1 trillion for bitcoin), so the 50% rally in two weeks works out to an increase of around $50 billion.  What’s even more amazing about Ethereum’s surge over the last two weeks is that it isn’t even close to a record in terms of two-week gains. As recently as January, Ethereum saw its value more than double in two weeks.

The chart below shows the rolling two-week change of Ethereum over the last three years.  During that span, there have actually been five other periods where the two-week change was even higher. 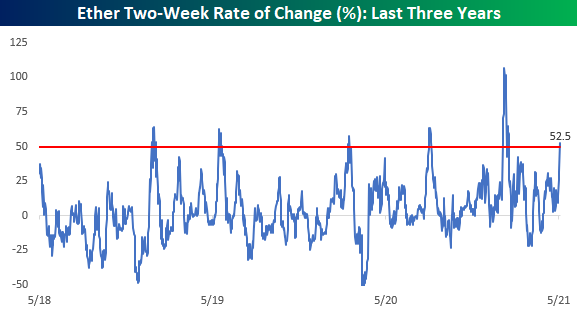 When anything appreciates 50%+ in a two-week span, it only seems logical that it would experience some sort of reversion to the mean.  Then again, a two-week rally of 50% seems to defy all logic in the first place, so who knows.  The chart below shows the price of ether over the last three years with red dots showing every time the trailing two-week return was greater than 50%.  Looking at the chart, there were pullbacks following some of the prior periods, but they were hardly guaranteed.  After the most recent surge in January, for example, ether prices barely experienced a hiccup. 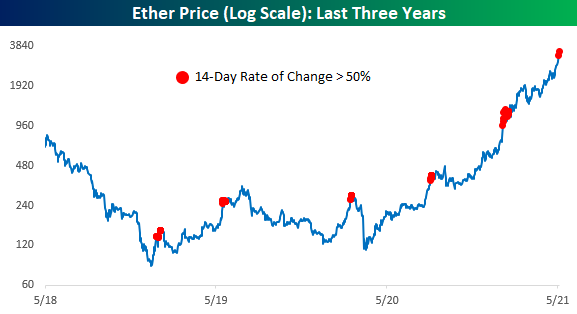 The table below shows the performance of ether over the following week, month, and three months after the first day in each period where ether prices saw a 50% two-week gain.  In three of the five prior periods, ether was lower in price a week later for a median decline of 1%.  One month later, though, ether rallied three out of five times for a median gain of 16.2%, and three months later, the median gain was 1.88%.

Looking at the results, there is obviously no clear trend in ether prices following similar surges over a two-week span, but the magnitude of the moves in either direction shows just how volatile investing/trading in the crypto-space can be.  Click here to view Bespoke’s premium membership options for our best research available. 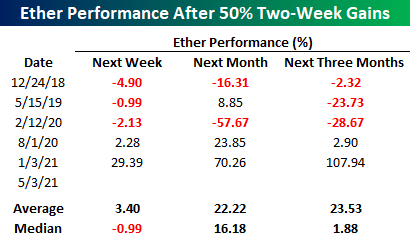