In addition to providing a more liquid alternative to mutual funds, one of the big selling points of ETFs over the years has been the fact that since active management has been so bad on a collective basis, investors are better off settling for ‘market’ returns.  This chart using data from Standard and Poors illustrates the point.  Going back to 2001, there have only been six years where more than half of all domestic equity mutual funds outperformed the S&P 1500, and there has never been a year where even 60% of them outperformed.  At the other extreme, you have years like 2011 and 2014 where less than 20% of funds outperformed. 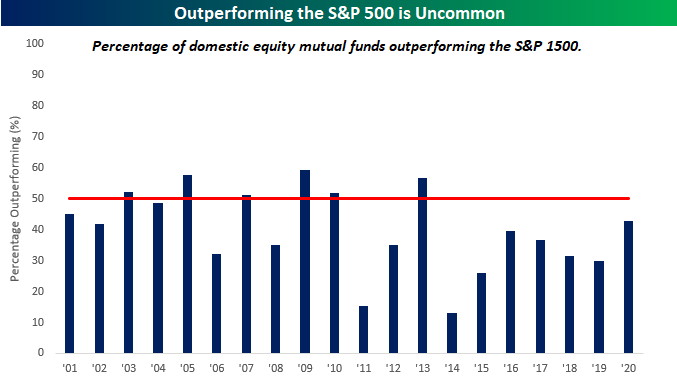 Given the underperformance of active management over the years, it only makes sense that the vast majority of ETFs on the market have been passive in nature. There are also other factors like there being less of an ability to arbitrage that makes actively managed ETFs less feasible, but in any event, investor demand for passive index-tracking vehicles has been the main driver behind the explosive growth of ETFs.

For an investment vehicle that gained popularity because of its passive nature, the fact that actively managed ETFs have become so popular is noteworthy.  Two factors behind their increased popularity stem from the success of the ARK funds, which have seen their assets under management swell to around $50 billion, and fees.  Wall Street loves fees and because they offer more analysis behind security selection, actively managed ETFs can justify charging higher fees. For example, weighted based on Assets Under Management, ETFs have an average expense ratio of 0.19% per year.  Within the actively managed ETF space, though, the weighted average expense ratio is nearly triple that at 0.54%.  This new wave of actively managed ETFs can charge whatever fees they want, but ultimately, performance matters, and depending on how they perform over time will likely play a large role in how popular this area of the ETF space becomes.  Start a two-week free trial to Bespoke Institutional to access all of our analysis and market commentary. 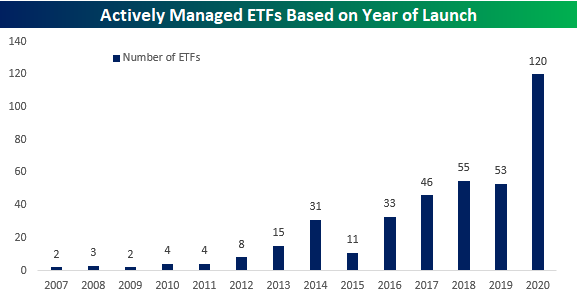