Energy (XLE) Finally Above Its 50-DMA

As we noted yesterday, more and more sectors have begun to cross back above their 50-DMAs in the last couple of weeks. With the outperformance of recent underperformers in yesterday’s session, the most beaten-down sector, Energy (XLE), finally managed to move back above its 50-DMA. Yesterday marked the first time that XLE had closed above its 50-DMA since January 10th. As for today, XLE is poised to gap up over 3% at the open bringing it further above its 50-DMA. 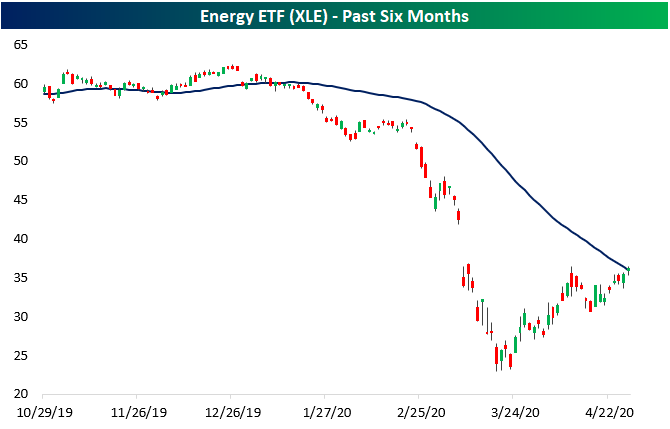 With XLE being under its 50-DMA for nearly four full months, that streak ending at 74 trading days was the fifth-longest in the ETF’s history.  The last time XLE experienced a similar streak was in 2017 which was actually the longest streak on record ending at 119 days. The other longer streaks came in 2015, 2008, and in 2001. 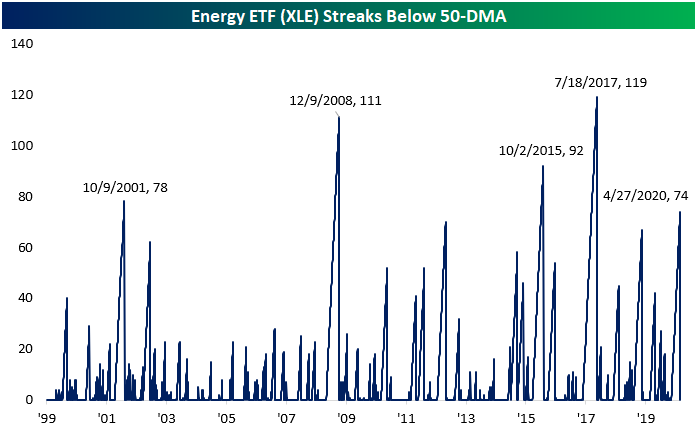 As for performance after these long streaks below the 50-DMA come to an end, XLE has typically been pretty weak.  In the table below, we look at all prior streaks below the 50-DMA that lasted for at least 60 trading days (roughly three months).  One week after such streaks come to an end has only seen XLE higher around a quarter of the time with an average decline of 0.47%.  Returns have also been positive less than half of the time one, three, and six months later. Fortunately, one year later XLE has been higher 71.4% of the time with an average gain of 2.8% (median 6.17%), although even here, those returns are nothing to get overly excited about.  Start a two-week free trial to Bespoke Institutional to access our full range of research and interactive tools. 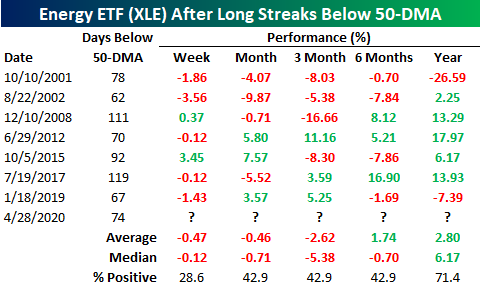