You know those scenes in the movies where a character finds themselves hanging off a bridge, and slowly their sweaty grip starts to loosen as a finger or two starts to slip?  That’s what the energy sector is going through right now.  As oil prices have been under pressure over the last few months, energy stocks had been holding up relatively well as the S&P 500 Energy sector hit a new cycle high exactly a month ago today. Since then, the sector has declined nearly 9% even as the S&P 500 has moved higher.  Last week, the sector broke below its 50-DMA for the first time in over two months before stabilizing this week.  Since that break below the 50-DMA on 12/6, the sector has made multiple intraday attempts (including today) to get back above it, but each time the sector has sold off and finished off its intraday highs.  When looking at a price chart, any time you see a security break below a key moving average and then make several unsuccessful attempts to get back above that level, it’s often a sign of a momentum shift. 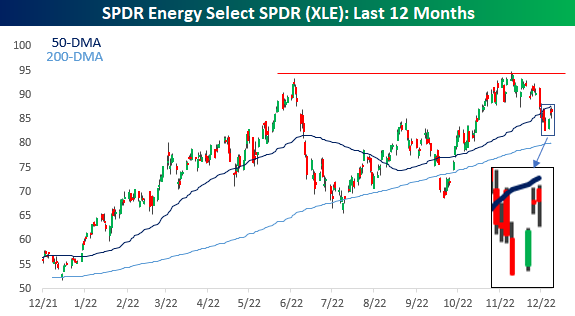 On a relative strength basis, the Energy sector is also toeing a key trendline.  The chart below compares the relative strength of XLE to the S&P 500 (SPY) over the last year.  During that time, Energy’s relative strength has been riding a trendline higher with bounces each time it kissed that level.  The most recent example occurred this week, but at this point, the bounce has been meager.  Energy stocks have been outperforming energy commodities in recent months, so it’s only natural to see some mean reversion in the stocks as well, but with the sector already breaking below its 50-DMA, this is a key trendline to watch.  If the sector’s relative strength weakens further, the technical picture for the sector would weaken materially, which would be a development investors in just about every other sector wouldn’t shed a tear for. Click here to learn more about Bespoke’s premium stock market research service. 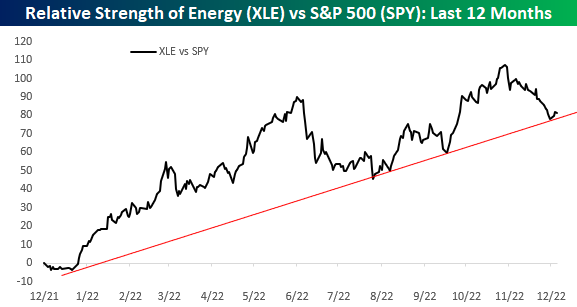