With the bond market closed for the Columbus Day holiday, it was a very quiet day in the equity market yesterday.  As we noted in last night’s Closer report, it was the lowest volume full day of trading since December 2017.  With the lack of any big moves, the lists of new highs and new lows were very small as well.  In the S&P 1500, which includes large-cap (S&P 500), mid-cap (S&P 400), and small-cap (S&P 600) stocks, there were just eight 52-week highs and 18 new lows.  One standout sector on the list of new lows, though, was Energy.  As shown in the table below, eleven of the eighteen stocks on the list of new lows were from the Energy sector.  Also, it’s not as though Energy is a big sector within the index as it accounts for less than 6% of the index’s constituents. 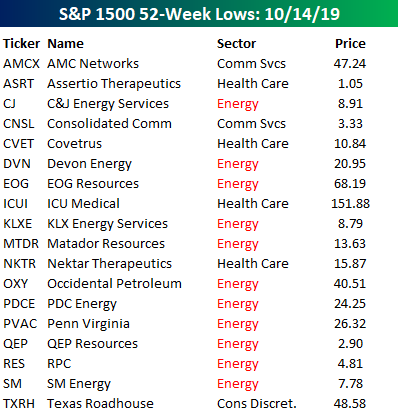 The fact that so many stocks from the Energy sector make up the list of new lows shouldn’t come as too much of a surprise after looking at a chart of the sector over the last year.  While the S&P 500 is within 2% of new highs, Energy is within 10% of a 52-week low.  While the Energy sector remains mired in a long-term downtrend, it is interesting to note that it is showing some early signs of a double-bottom following its recent sell-off.  With the sector so close to 52-week lows and sentiment being so negative, any positive news would provide a big boost. An example of that negative sentiment is the latest release of the BofA Merrill Fund Manager Survey which showed that overall asset allocation towards the Energy sector is further below its historical average than any other sector/asset class. Start a two-week free trial to Bespoke Premium to sample our most actionable investment research.  If you use this checkout link, you’ll receive a 10% discount on an annual membership if you stick with it past your trial period. 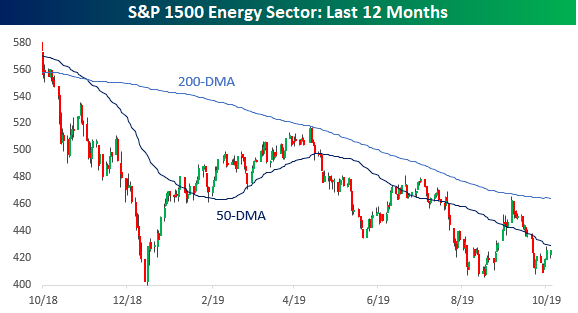