Energy and Ethereum Lead The Way Higher in First Half

Across asset classes, energy was the winning theme with commodities like oil (USO) and natural gas (UNG) boasting some of the strongest first-half returns alongside Energy sector stocks (XLE).  USO was the top performer of these with its 51.11% total return since the start of the year.  Alongside XLE and UNG’s over 40% gains, the Ethereum Trust (ETHE) also rallied 44.32%, albeit there has been a significant pullback in the past month. Although ETHE posted big gains, Bitcoin (GBTC) took a loss with a 6.84% decline in the first half.  That is not to say it was not up significantly at one point during the first half as Q2 alone saw a 40.43% loss that brought it into the red for the half.  The only other assets to have fallen by more than Bitcoin in the first half were the Japanese Yen (FXY), Gold (GLD), and long bonds (TLT). TLT saw the weakest returns of all of these over the course of the past six months but more recently it has experienced better performance relative to other assets. In fact, its 4.42% rally in June was almost double that of the S&P 500.

In the equities space, again Energy was the top performer while small caps and value outperformed as well in the first half.  That was not necessarily the case in June though as there was evidence of rotation out of value and into growth.  The NASDAQ 100 (QQQ) and S&P 500 Growth (IVEW) were two of the top-performing ETFs in June and Q2 while value stocks actually fell in June.

As for international equities, Canada (EWC) and Russia (RXS) were the strongest country ETFs in the first half. While it was not enough to lift its first-half gain to the high end of the range of countries shown, Brazil (EWZ) did see a large degree of outperformance in Q2 with a 23.05% gain.  That is nearly double the next best performer, Russia. Additionally, these were the only two countries up significantly in June as most countries saw a loss.  Year-to-date, China (ASHR) and Japan (EWJ) have been the weakest of the country ETFs.  Click here to view Bespoke’s premium membership options. 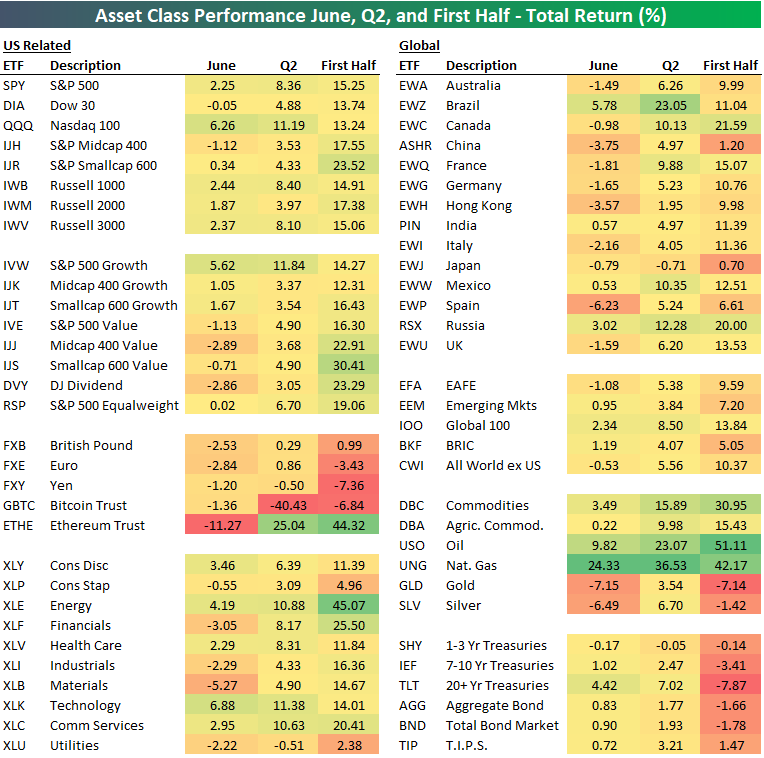