Only a couple of months after the lowest (April) and second-lowest (May) readings ever, the New York Fed’s index on manufacturing activity was expected to improve with forecasts calling for a reading of -29.6. While that would have been a sizeable increase, it still would have resulted in the fifth-lowest reading on record.  Instead, the headline number improved by much more coming in at -0.2 this morning. Of the survey’s respondents, 36.1% reported better general business conditions while another 36.3% reported worse conditions. That near-zero reading in the index indicates that activity on net in the region was essentially unchanged compared to last month rather than experience large contractions like the prior two months. That massive rebound likely has reopenings to thank as the survey results were collected between June 2nd and June 9th which coincided with every region in the state including New York City entering at least Phase One of the reopening cycle (allowing manufacturers, construction, and supply chain businesses to resume business).  By the collection period, many regions, but not NYC had actually entered Phase Two which allows for an even wider array of activity.

As current conditions are no longer showing extremely weak activity and reopenings give hope of a return to normal, firms turned much more optimistic with the index for conditions six months out ripping higher to 56.5.  As recently as March, the index was only at 1.2 which was the weakest reading since February of 2009.  Just three months later, the 56.5 reading is the highest since October 2009 when the index was just 0.3 points higher.

With future expectations now elevated and current conditions still somewhat muted, albeit improved, there remains a massive disconnect between how businesses view their present and future situations. As shown below, that spread was at a record high of 85.2 back in April as the index for current conditions was at a record low.  It has since fallen down to 56.7 which is still higher than all but six other months in the history of the survey excluding April and May. Prior to the past few months, the last time the spread was at these levels was back in November of 2010.

As shown in the table below, for the individual categories of the report, more than half for current conditions still remain in contraction though they are greatly improved from last month.  On the other hand, of the indices for expectations, the only one in contraction in June was the one for inventories. For General Business Conditions, New Orders, and Shipments, the month over month increase in June was the largest on record.  While not the biggest ever one-month increases, the indices for the expectations of those same categories, as well as Number of Employees, Capital Expenditure, and Technology spending in addition to current Prices Paid and Average Workweek all saw one-month gains in the 90th percentile or better. Broadly speaking, the readings for this month’s survey seem to indicate that activity has begun to find a footing in June, even if that is at weaker levels, as firms hold a rosier outlook for the future. 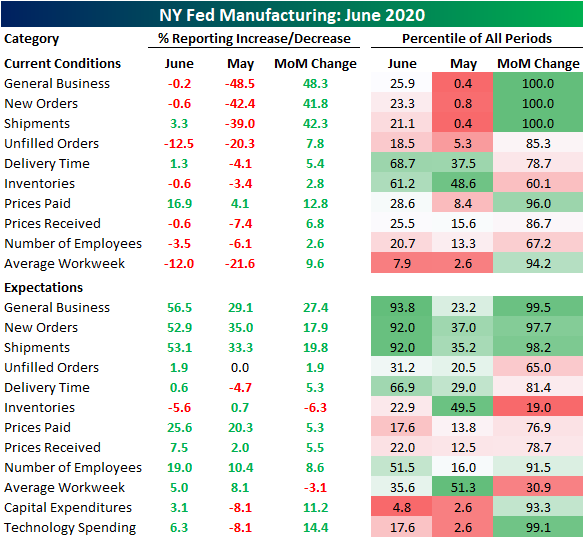 Again, one of the stronger aspects of this month’s report was businesses’ reporting optimism for the future.  The indices for future plans for Cap-Ex and Technology spending embody this.  Although they remain at the low end of their historic ranges even after historically large one-month gains, both indices showed more firms plan to invest rather than disinvest in their businesses.

As previously mentioned, the indices (both current conditions and future expectations) for New Orders and Shipments saw massive moves this month.  That indicates demand has firmed (though is perhaps not rising) and is no longer declining at the dramatic rate of the past few months. As with the headline number, the current new orders showed a very slight contraction in June while the index for expectations was at its highest level since August of 2005.

Meanwhile, there was actually a slight pickup in Shipments as the index rose to a positive 3.3.  Similar to New Orders, firms’ optimism about the future was one of the bright spots with the index for Shipments six months out rising to 53.1.  That is the highest reading since August of 2014.

Employment indicators were actually a bit of a soft spot in this month’s survey.  The current indices for Number of Employees and Average Workweek were some of the weakest readings across the various categories albeit they too improved from May. 21.9% of respondents reported a lower level of workers compared to 18.4% that reported an increase in their workforce.  Meanwhile, 24.1% reported a shorter workweek while about half of that (12.1%) reported a longer workweek. Click here to view Bespoke’s premium membership options for our best research available. 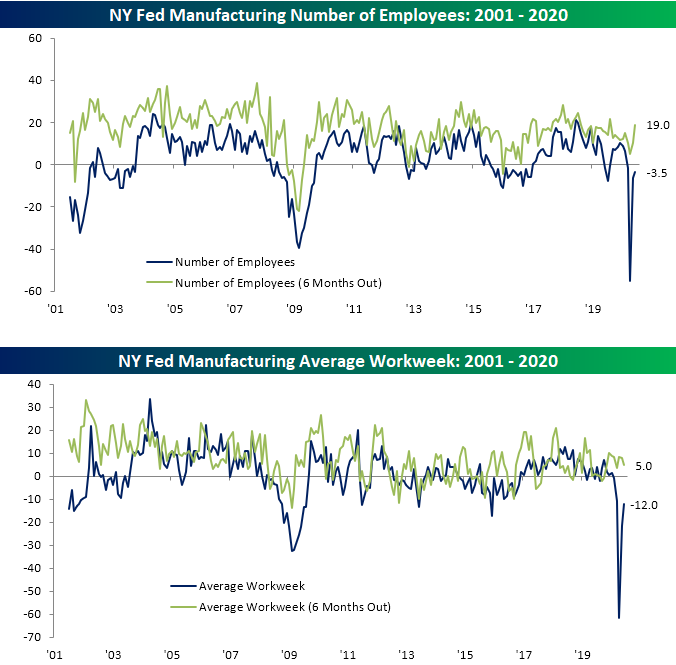