The US equity market has seen a massive rally in reaction to what is looking like a Biden victory over President Trump coupled with the Republican party maintianing its majority in the US Senate.  None of these results are official at this point, so they are subject to change, but these are the most likely scenarios as of now.  Outside of the US, emerging markets have also rallied.  In just the last two days, the MSCI Emerging Market ETF (EEM) has rallied 5% and broken above resistance to new 52-week highs.  If for no other reason then Biden’s campaign slogan isn’t America First, the rationale behind the rally makes some sense. 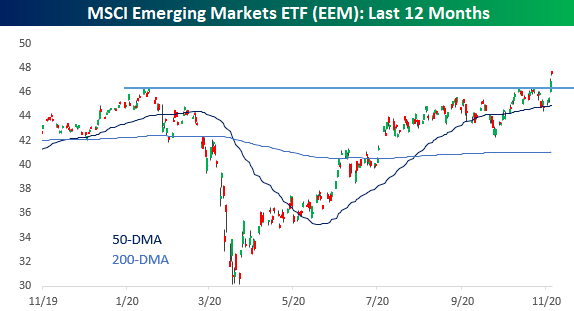 The reaction of EEM in the aftermath of this election is very much different from what happened in 2016.  Heading into the 2016 election, EEM had been trending higher, but pulled back in the days leading up to the election and broke its uptrend that had been in place since earlier in the year.  Again, Trump’s America First approach was understandably viewed as a headwind to emerging market equities. 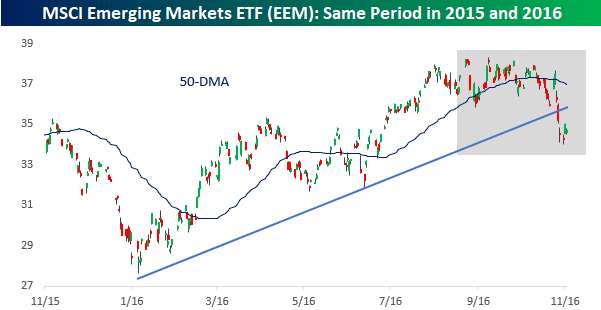 While the initial reaction of EEM to Trump’s election was negative, that weakness didn’t last long. The chart below shows the performance of EEM in the two months before and one year after the 2016 election.  The gray box represents the same period shown in the chart above.  Within days after breaking its uptrend after the 2016 election, EEM bounced back, rallied to its 50-DMA, tested its November low, and then in the early days of 2017 it was off to the races as EEM.  In fact, even accounting for the post-Election Day declines, one year after the 2016 election, EEM was up 25% which was actually more than the 21% return for the S&P 500!  The moral of the story here is that first reactions aren’t always the right reactions, and as an investor it’s not just imperative to know the environment you are operating in, but also when the tides are turning. Click here to view Bespoke’s premium membership options and unlock instant access to our research and interactive tools. 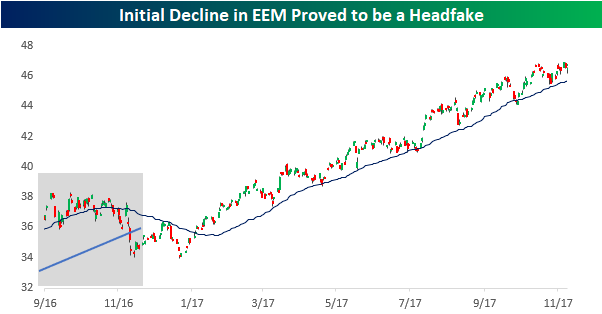