On the front page of most news sites today is the headline that Elon Musk has officially sent notice terminating his deal to acquire Twitter (TWTR).  Similar to the way other celebrities have appeared to be major catalysts for a stock in the past year, like Joe Rogan and Spotify (SPOT), Musk’s interest in one of the cornerstones of social media has played a major role in the movements of TWTR’s stock this year.  Below, we show a timeline of the saga overlaid on the charts of TWTR’s stock price and the daily percent change since the start of the year.

Back in early April—only a little more than a week after Musk tweeted a poll regarding the platform and free speech then following up with a tweet mentioning the “consequences of this poll will be important”—markets got confirmation that one of history’s wealthiest people had become the company’s largest single owner of Twitter with a 9.2% passive stake. That sent the stock surging 27.12% in a single day.  The following day, TWTR rose another 2% when the company extended an offer for him to join the Board of Directors. That was an offer that would be rejected only a few days later as the stock began to reverse some of the massive gains. TWTR would not go on to turn around until Musk officially offered to buy the company at $54.20 per share (4/14), his financing was confirmed (4/21), and finally, when a deal was reached (4/25).

We always say how the market is forward-looking, and it appears as though Mr. Market knew the deal was fake news the entire time.  On the day the deal was announced, TWTR peaked a few dollars short of Musk’s proposed price and has been on the decline ever since.  The worst of the reversal occurred in mid-May as Musk expressed a hold-up regarding the company’s tracking and reporting on fake/bot accounts. A lack of resolution to Musk’s reservation has been the justification for the undoing of the deal which was confirmed last Friday, resulting in Twitter shares to fall 13.74% since last Thursday’s close. 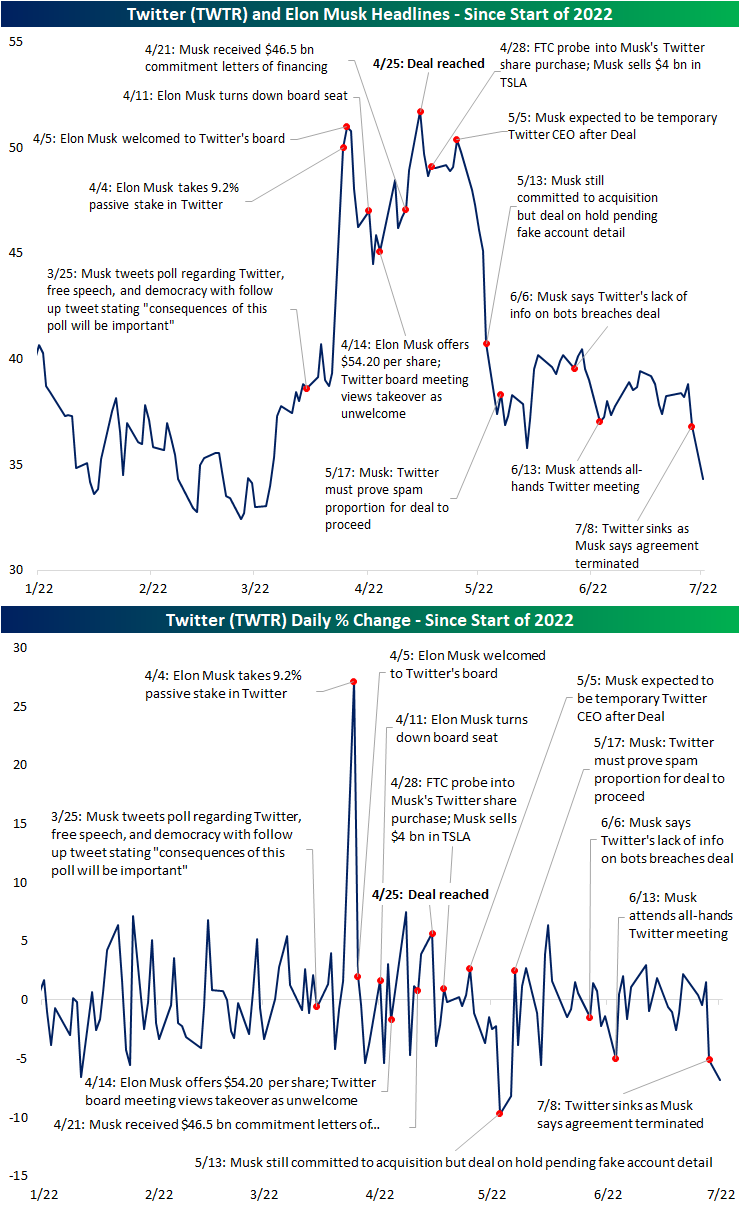 Finally, we would also note that even though Twitter (TWTR) is a major player in the social media space, it is way down the list in terms of the S&P 500’s largest stocks; especially after the recent drop. Conversely, Musk’s Tesla (TSLA) is currently the fifth-largest stock in the index based on market cap indicating it has an outsized impact on the moves of the S&P. Given all the recent events and Musk’s involvement, Twitter and Tesla have been trading increasingly in sync with one another over the past few months implying these moves in Twitter to some extent actually have ripple effects for the broader market via sympathetic moves in TSLA. For example, while Twitter is down 9.5% today as of this writing, TSLA is falling 6.5%.

Below we show the correlation between the daily moves in TWTR and TSLA on a rolling 2-month basis which would roughly cover the period when the Twitter deal came into question and shares began to roll over.  Historically, the two stocks have had a modest positive correlation with a handful of stints in which that relationship became very strong like late 2018, the COVID Crash, and the first quarter of this year when growth stocks broadly fell together.  This year, that correlation weakened a bit as the Twitter acquisition news began to develop, but since the deal began to fall apart, it has started to rip higher once again with the current level entering the top decile of historical readings. Click here to learn more about Bespoke’s premium stock market research service. 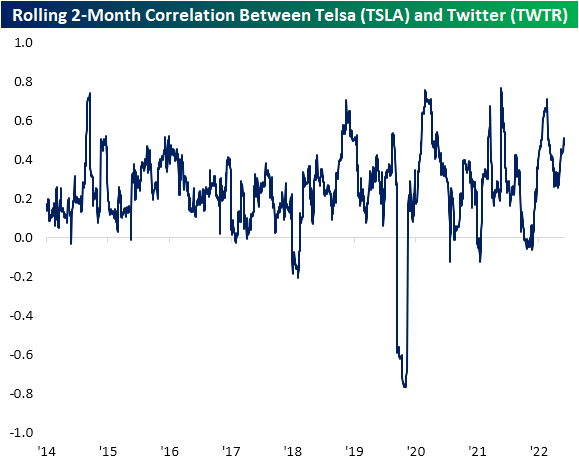