The final regional Fed manufacturing survey of the month was out today with the release of the Dallas Fed’s manufacturing survey. General business activity rose 5.6 points in September to 13.6.  That marks back to back months with expansionary activity since August and September of last year.  This month also marked the strongest reading since November of 2018 as the index has risen for five straight months.  After pulling back in the early summer, the index for expectations of general business activity has continued to rebound in a big way rising to 28 from 20.4 last month.  That is now at the highest level since October 2018 indicating a generally positive outlook for the future. 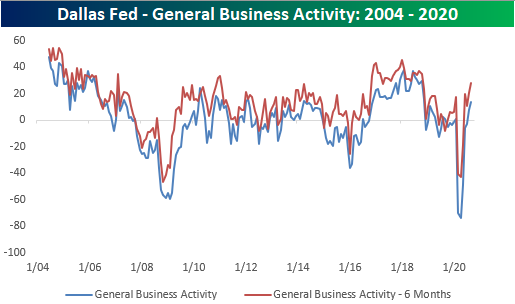 With general business activity improved, breadth in this month’s report continued to be strong.  Consistent with other surveys this month, the only index that remains in contraction is that of Finished Good Inventories.  While it remains in contraction, this month’s 15.4 point rise was a big improvement from the prior month when the index stood at a reading of -17.3.  That is the highest level since March of last year.  Of the other components, there were four that fell in September: Company Outlook, Unfilled Orders, Shipments, and Hours Worked.  Although these indices fell, they each remain in the upper quintile of their respective historical ranges with readings that indicate further growth, just at a slower pace than August.

One major strength of recent manufacturing data has been surging order volumes.  The Dallas Fed’s survey for September was no exception as the index for New Orders rose for a fifth straight month to 14.7.  The only higher reading in the past two years was back in January of this year.  Not only did new orders rise, but it was also at a faster clip than August as the index for New Orders Growth rose to 13.2 from 11.8.  Again this was the highest reading since the second half of 2018.  While both indices remain around some of their strongest levels of the past couple of years, Unfilled Orders and Shipments both fell by 1.8 points in September.  That was the second consecutive lower reading for Unfilled Orders and the first since April for shipments.  Regardless of those declines, these indices all show that businesses continue to increasingly receive and fill orders at a strong rate. 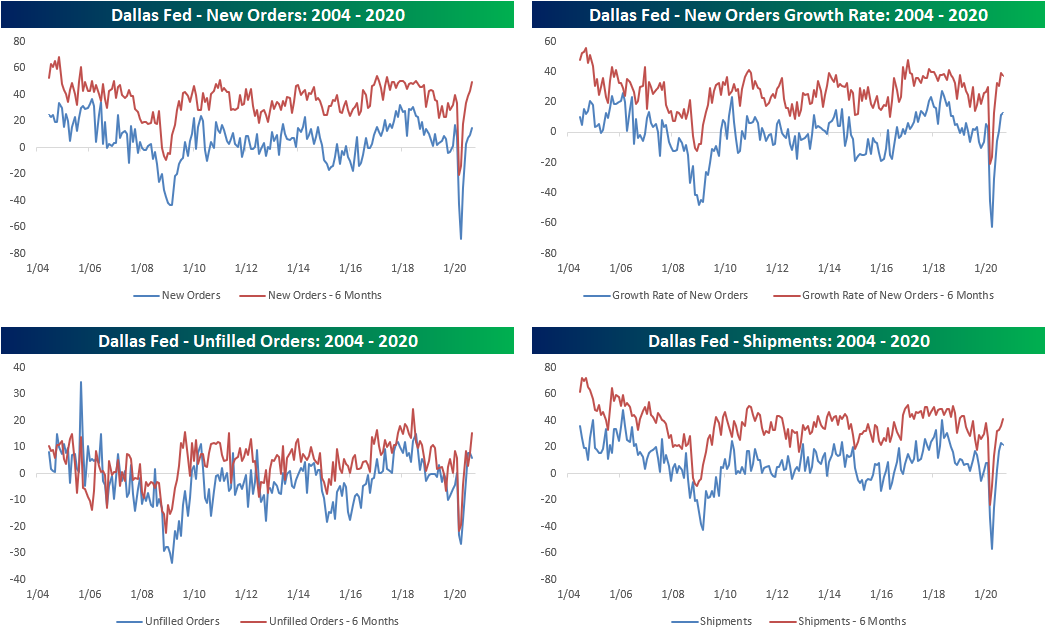 Given that orders remain high and inventories continue to be worked off, production has continued to ramp back up.  The index for production rose to 22.3 which brings the index right back to where it was two years ago. 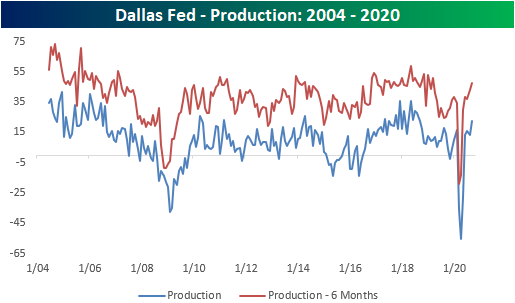 With production on the rise, so too is employment.  Hours worked continued to rise (albeit at a slowed pace from August) and the index for Employment rose to 14.5 as a higher share of businesses report net hirings than firings. This index is now at its highest level in one year.  Click here to view Bespoke’s premium membership options for our best research available. 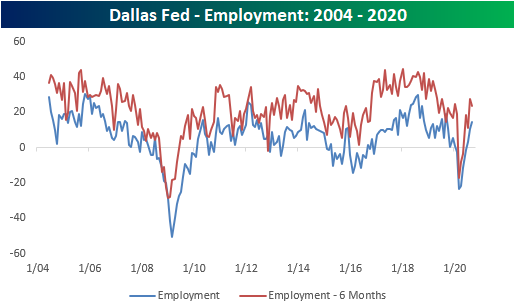