In today’s Chart of the Day, we detailed Tesla’s (TSLA) rise above $1,000 and what other stocks like Google (GOOGL) and Amazon (AMZN) have looked like when they first crossed $1,000.  With TSLA reaching these kinds of levels, it also now has a record share of the total market cap of global automobile makers. Including the electric car company with the other 20 companies in the S&P Global 1200 Automobile Index, TSLA accounts for just over 22% of the total market cap.  That is the second-largest of any company behind only Toyota whose $210.69 bn (USD-adjusted) accounts for 24.43%.  As we have detailed in the past, TSLA’s market cap is now significantly larger than other US automobile producers like Ford (F), General Motors (GM), and Harley Davidson (HOG). In fact, it is now more than double the market caps of those companies combined! The rest of the world’s automobile companies including Japanese names like Honda and German names like BMW and Daimler (Mercedes) account for 69.58% of the total market cap. 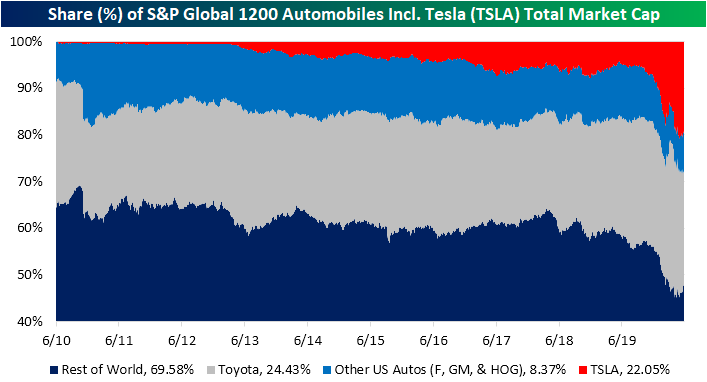 Although TSLA accounts for a massive share of world automaker’s market cap, it still makes up for a very small share of these companies’ total revenues.  In fact, its $24.58 bn in sales in 2019 only accounted for 1.29% of all these companies’ total revenues. Albeit it is a high growth name, that leaves it with one of the higher valuations on a P/S and P/B basis. A similar dynamic can be seen for other high-end brands like Italian brand Ferrari and German brand Porsche.  The same can be said for another electric vehicle stock that has received a large amount of headline attention recently, Nikola (NKLA). NKLA likewise is another name with a fairly large disparity between its sales and share of market cap.  Another high growth name and recent IPO, Nikola actually had no revenues in 2019 but is valued at $23.46 bn or 2.56% of total market cap. That is more than some other major global brands like Hyundai, Suzuki, and Subaru to name a few.   Click here to view Bespoke’s premium membership options for our best research available. 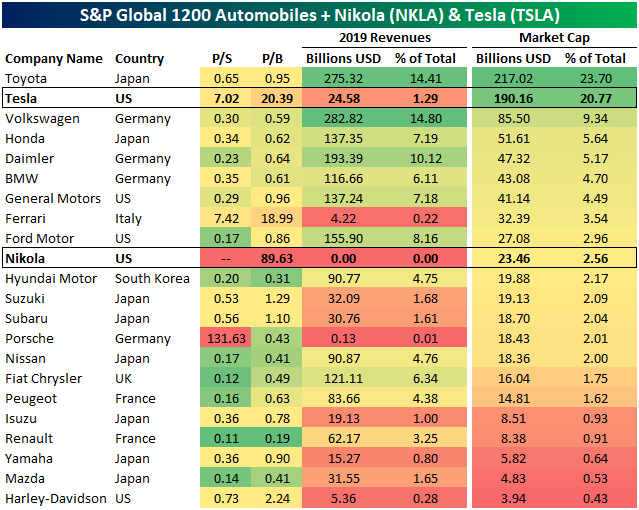