On 6/5, El Salvador passed a bill that made Bitcoin legal tender in the nation effective 9/17. Since passing the bill, the country hosted a Bitcoin Week, which generated excitement from the crypto community in which he and political/industry leaders spoke about the logistics and benefits of legalizing Bitcoin as a legal tender.  During Bitcoin week, El Salvador’s leadership unveiled its plans for ‘Bitcoin City’, which will be funded by issuing a $1 billion Bitcoin Bond. The city (and the Bitcoin mining inside of it) will be powered by geothermal power generated from a nearby Volcano.

Over the weekend, El Salvador’s President, Nayib Bukele took to Twitter, stating that “El Salvador bought the dip” and added that he trades cryptocurrency for his country through his phone. Although Bitcoin enthusiasts view this adoption as revolutionary, the investing community has taken a different view. Since the country officially announced that Bitcoin would become legal tender, its bonds have declined in value.  As one example, the price of the country’s 7.65% bonds maturing in June 2035 has plummeted by 37.5%. Investors are wary of the idea of tying a country’s assets and balance of payments to an extremely volatile asset, and that has caused the yield on the bond shown below to rise nearly over 600 bps from under 8% to over 14% now. 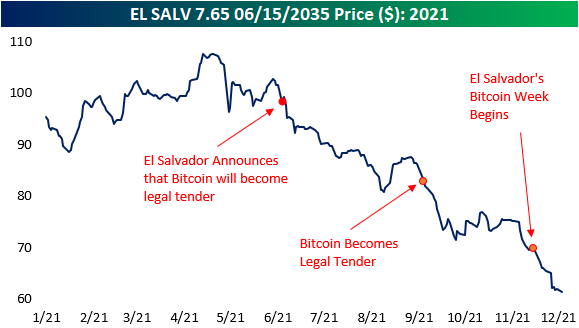 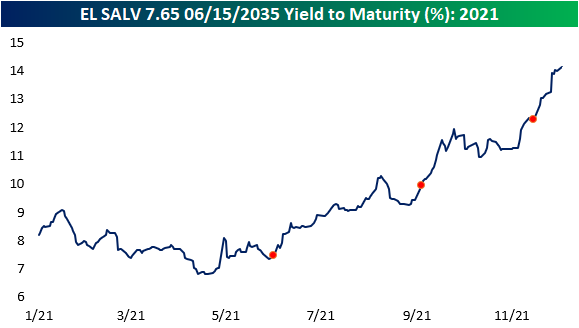 The cost of insuring against default for El Salvador’s debt (credit default swaps) has risen significantly since the nation legalized Bitcoin as legal tender, and CDS spreads have more than doubled over the period. Will this dissuade other countries from using cryptocurrencies as legal tender? Click here to view Bespoke’s premium membership options. 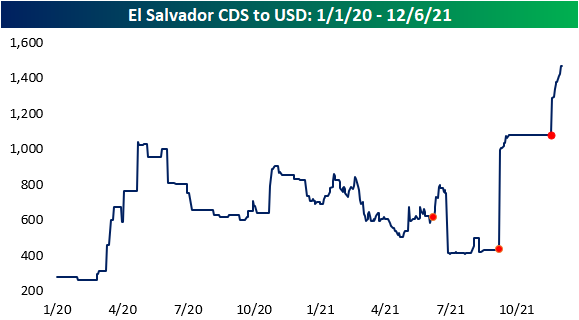