After eight straight days of gains, the Nasdaq looks like it’s ready for a breather today as the index is down over 1%.  The current streak represented the longest string of back to back gains for the Nasdaq of 2020 and the longest streak since the 11-day streak that came to an end last December.  Throughout the Nasdaq’s history going back to 1971, there have been over 80 streaks of at least eight trading days, but since the tech boom really took off in the late 1990s, these streaks haven’t been as frequent with just 26 now since 1995. 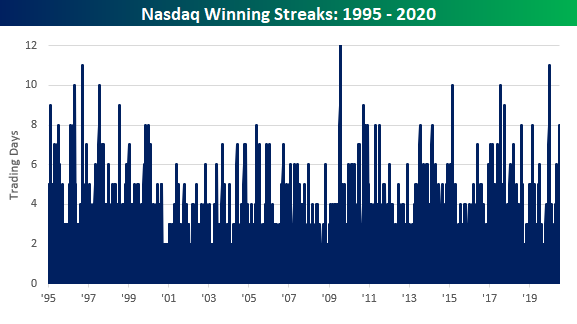 Once a winning streak of eight or more days comes to an end, one would think that short-term returns going forward would be below average.  However, looking back at how the Nasdaq performed following prior eight-day winning streaks, more often than not, the index has actually tended to have better than average short-term forward performance.  In the week that followed these prior streaks, the Nasdaq averaged a gain of 0.55 (median: 0.35%) with positive returns 68% of the time.  One month later, the average gain increased to 1.79% (median: 2.15%) with positive returns 84% of the time.  Three months later, the effect of an eight-day winning streak probably didn’t mean much, but even here the Nasdaq averaged a gain of 4.14% (median: 3.96%) with gains 72% of the time.  What’s notable about all of these performance numbers is that they are all better and more consistent to the upside than the Nasdaq’s historical average one week, one month, and three-month returns.  Today’s performance is ending the Nasdaq’s winning streak with a thud, but history shows that prior streaks have typically been part of longer periods of outperformance.

One item worth noting about today’s decline for the Nasdaq, though, is that with a decline of over 2%, the only other time where an eight-day winning streak ended with a decline of more than 2% was back in July 1986. Like What you see? Click here to view all of Bespoke’s membership options for access to the best research available. 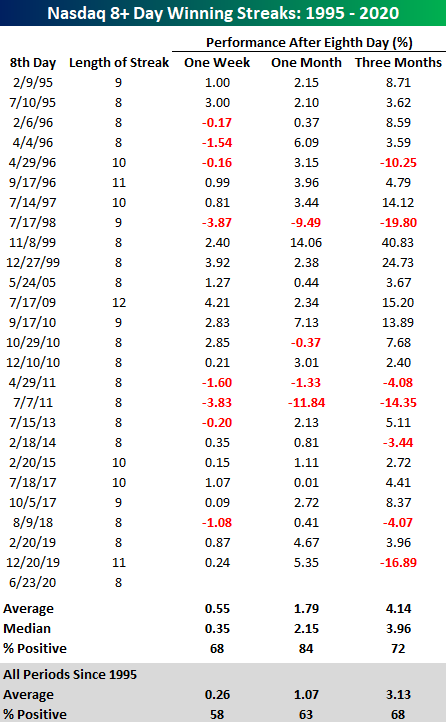