Earnings Give Ulta (ULTA) The Chance To Fill The Gap

In August, Ulta Beauty (ULTA) missed EPS and sales estimates while also lowering guidance. The stock experienced its worst decline on earnings since it began trading in 2009 with a gap down of over 25% and further downside throughout the day. Ultimately, the stock closed 29.55% lower. ULTA reported third-quarter earnings last night after the close, and the stock has seen quite the turnaround. Although it once again missed revenue estimates, the company beat EPS estimates by 12 cents and guidance was inline. In response today, Ulta is having its single best day since March 11th, 2016 (another reaction to earnings), rising over 12.5%.

Earnings are not the only catalyst for ULTA as the stock has traded around multiple significant support and resistance levels. The massive drop in August brought ULTA down to support in the mid-$220s range. This can be traced back to multiple points throughout the past few years including last December’s lows. Given just how oversold the stock had gotten in August, ULTA experienced a brief run higher before successfully retesting these levels again in the past several days. The jump on earnings today has marked a considerable rebound off of that support and has brought the stock up to resistance in the mid-$260s range. This is another interesting level as it marked the October 1st high following the last earnings report, support in the fall of 2018, and the highs in October of 2016. Assuming the stock manages to break above this resistance, it has the ability to fill the massive August gap. Start a two-week free trial to Bespoke Institutional to access our interactive Earnings Explorers and much more. 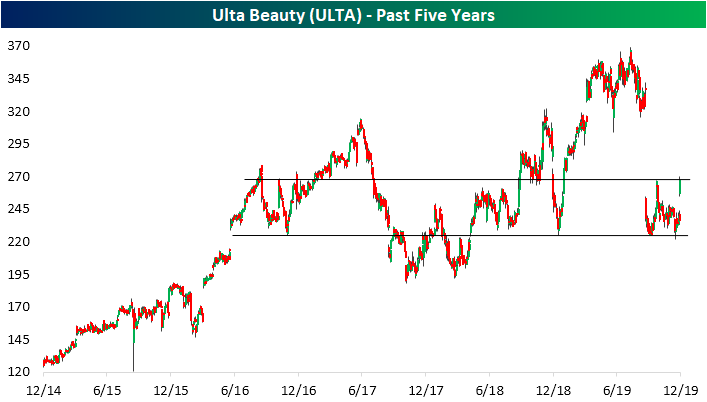