This earnings season, we have frequently mentioned how beat rates have continued to rise relentlessly. From our Earnings Explorer database, our 3-month rolling EPS beat rate currently stands at a record high of 78.19%. That is nearly 20 percentage points higher than the historical average of 59.37%. The sales beat rate is not at a record, but it too is elevated at 69.09% versus the historical average of 56.45%.  That means that of the companies that have reported earnings over the past three months, a massive proportion are exceeding consensus sales and EPS estimates.

While earnings beat rates have continued to grind higher, economic data is another story. The Citi Economic Surprise Index basically tracks macroeconomic data and how it comes in relative to forecasts.  Higher readings indicate the data is trending stronger than expected and vice versa for negative readings. With the unprecedented shock to macroeconomic data in 2020, this index for the United States plummeted, but that was followed by a sharp rebound to record highs. Although the index for the US remains higher than anything prior to the pandemic, it has been heading lower since the summer.  In other words, economic data is still coming in better than expected but is not massively exceeding expectations to the degree it was back in the spring and early summer. 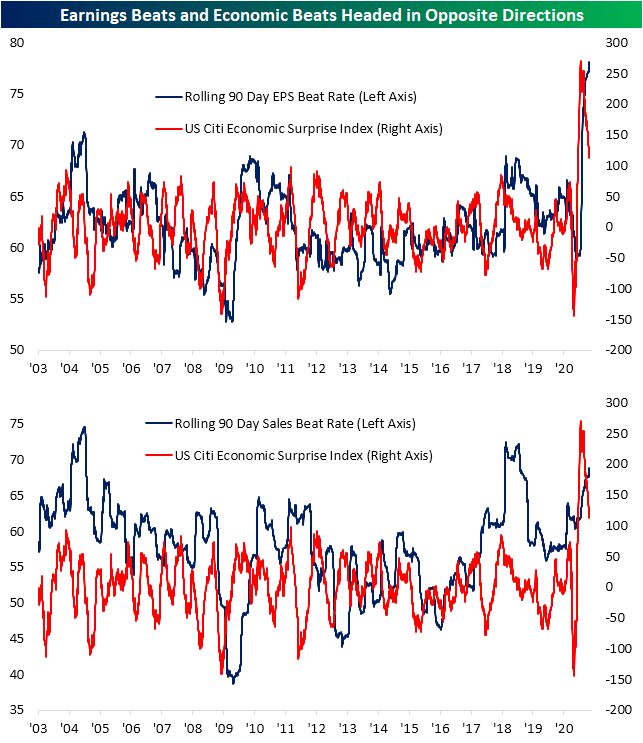