Major media stocks caught up in the Archego margin call have found some respite today as Discovery (DISCA) and ViacomCBS (VIAC) both trade higher.  Elsewhere in the Media and Entertainment industry, E.W. Scripps (SSP) came in at the top of our Stock Scores this week. Our Stock Scores ranks members of the S&P 1500 on their attractiveness based on a range of Fundamental, Technical, and Sentiment indicators. For access to our weekly Stock Scores screen, sign up here for access. SSP—which has a portfolio of local and national media outlets like TV stations and newspapers—came in this week with a perfect Technical score alongside high Fundamental and Sentiment scores.

At its multi-year highs earlier this month, E.W. Scripps (SSP) had broken out to multi-year highs before its sharp pullback in the second half of March which has brought the stock down around 20% from its closing high on March 12th. While that decline coincides with the big losses in VIAC and DISCA that resulted from prime brokers, who held positions equal to more than 5% of each company’s float, selling positions as hedge fund clients failed to meet margin calls on swap positions, in the case of SSP none of those same brokers like Credit Suisse or Morgan Stanley possess any significant stake.  Additionally, the technical damage has not been quite as severe for SSP.  Whereas the losses for VIAC or DISCA resulted in the stocks crashing through their 50-DMAs, SSP’s uptrend remains intact as it has so far managed to find support at its 50-DMA in the past week.  SSP didn’t rally nearly as much as DISCA or VIAC, they haven’t dropped nearly as much either. 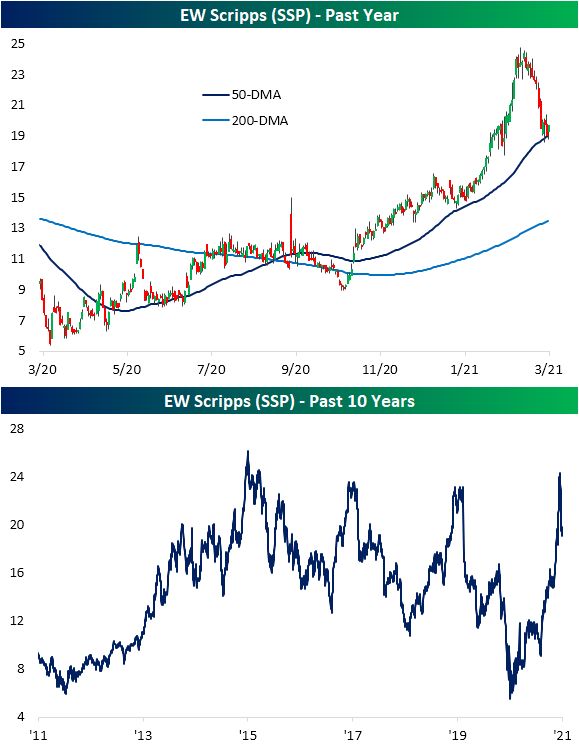 Not only is the technical picture positive, but an attractive valuation relative to its peers also played into EW Scripps’ high Stock Score this week.  SSP showed much stronger revenue growth YoY, up 37.45% in 2020, when compared to the average for other stocks in the Media and Entertainment Industry. On top of that stronger revenue growth, SSP trades at a discount to the average stock in its industry on a forward P/E, P/S, and EV/EBITDA basis. Those are also more attractive valuations than VIAC and DISCA in spite of both of those stocks having seen their prices nearly cut in half recently.  Respective of its own history, current valuations for SSP are also at the low end of the past decade’s range. Click here to view Bespoke’s premium membership options for our best research available. 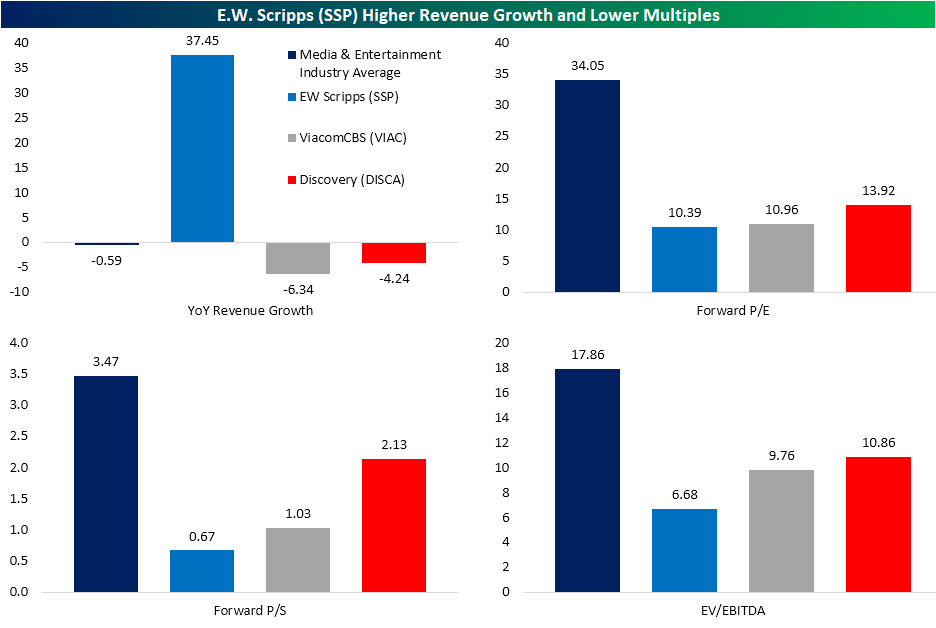