Dow Adds Another 1,000 Point Notch to Its Belt

While back below that level now, Friday’s close marked the 28th 1,000-point threshold that the DJIA crossed on a closing basis for the first time, and it was the first such cross of one of these thresholds in more than four months. While the financial media used to (and to a degree still does) make a big fuss about the DJIA crossing a 1,000 point level for the first time, these days it just isn’t what it used to be.  The table below lists each 1,000 point threshold that the DJIA has crossed in its history.  For each level, we also list the date the DJIA first crossed the 1,000 point level, how many days passed since the prior 1,000 point threshold, what percentage that threshold was of the index’s total level, and then how many times the DJIA has crossed above and below that level (on a closing basis).

Another interesting aspect of the DJIA’s path through 1,000 point thresholds is how many times it crossed each one of them.  10,000 and 11,000 were especially difficult levels for the DJIA to put through the rearview mirror.  The index crossed above or below 11,000 on 87 different occasions and 10,000 67 times. While those were extreme levels of congestion for the DJIA, two levels it glided right through were 5,000 and 19,000.  These are the only two 1,000 point levels from which the index has never looked back after first crossing above them. Sign up for Bespoke’s “2020” special and get our upcoming Bespoke Report 2020 Market Outlook and Investor Toolkit. 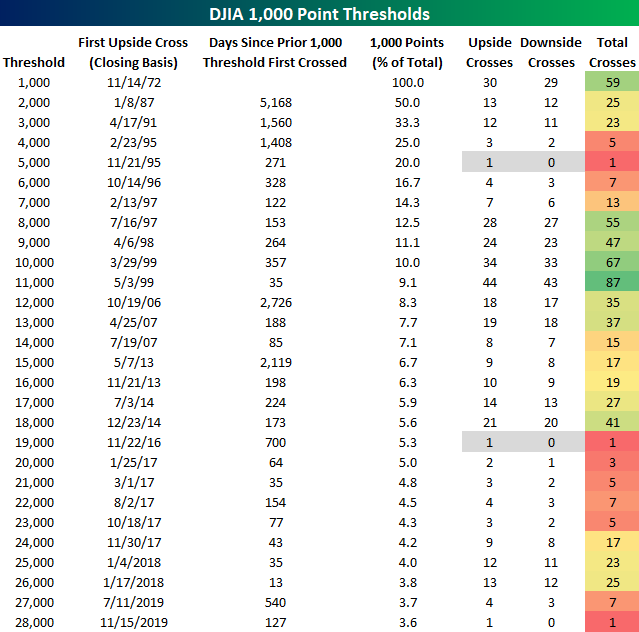