By posting this, we’re probably jinxing it, but the DJIA is on the verge of topping another 1,000 point threshold less than two months after first topping 28,000.  While the media makes a big deal of each of these thresholds, we would note that the road to 29,000 from 28,000 is only 3.4%.  That’s hardly a momentous move.  Since Trump became President in January 2017, though, 29,000 would be the 10th 1,000-point threshold that the DJIA would cross under his watch.

The table below lists the date that the DJIA first crossed each 1,000-point threshold throughout history.  For each level, we also include the number of calendar days that elapsed between the first cross of that threshold and the prior one, how large a percentage gain that the 1000-point threshold represents versus the prior one, and then how many times the DJIA has crossed each threshold (on a closing basis) both to the upside and downside.  One of the most notable aspects of the table in our view is that even though each threshold is a smaller percentage than the prior one, there have been so few crosses (above and below) of most of the thresholds since the Dow first crossed 19,000 after the 2016 election.  19,000 was only crossed once, and six of the other nine thresholds since then haven’t been crossed more than ten times.  That’s indicative of a market that has been rallying and not looking back.  Start a two-week free trial to Bespoke Institutional for full access to our research platform. 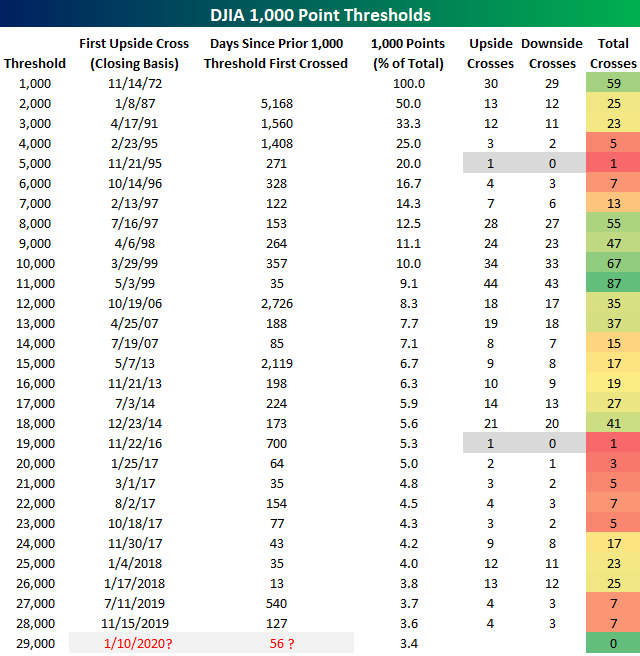