It’s a bit ironic that just as inflation is raging at the highest levels in decades, the value of the US dollar (at least relative to other currencies) has been surging. Imagine where we’d be if the dollar was falling in value.  Just last week, the y/y change in the US Dollar Index topped 18.4% which is a rate of change not seen since the summer of 2015 when China was devaluing the yuan. Throughout the history of the US Dollar Index, there have only been a handful of other times that it has rallied this much over a year.  Even rarer have been times when the y/y change exceeded 20%. Click here to learn more about Bespoke’s premium stock market research service. 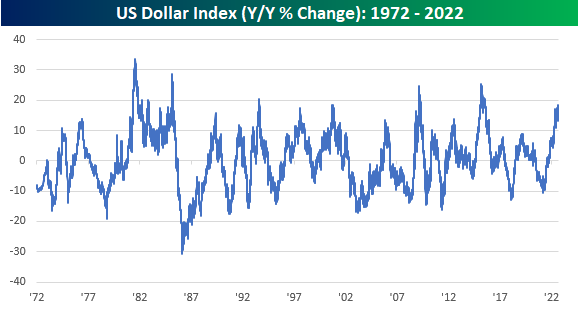 The dollar has already seen a big gain, but could this rally match the rarified air of prior 20%+ y/y rallies?  Anything is possible, but to get there, it’s going to have to do some heavy lifting. Just looking at a chart of the y/y change since the start of 2020, the momentum of the rally, while still trending higher, has slowed to more of a rangebound area than the blistering momentum experienced in late 2021 and early 2022. 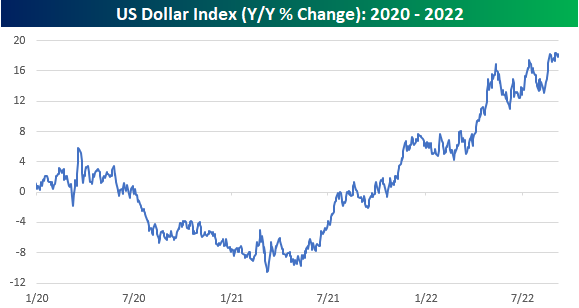 A price chart of the Dollar Index illustrates why.  For much of 2022, the comps for the y/y change have been relatively easy as the dollar sold off from its initial COVID surge and traded down to its lowest levels since 2018 and before that levels not seen since 2015.  The Dollar Index then made a double-bottom last summer and started to rally in the fall.  Therefore, now that the rally is starting to ‘lap’ its early stages, the comps are increasingly tougher.  From 9/6/21 to 10/6/21, the US Dollar Index rallied 2.4%, which means that just for the y/y change to remain at current levels, it would need to rally at least that much and then more on top of that to push the gain up to 20%. 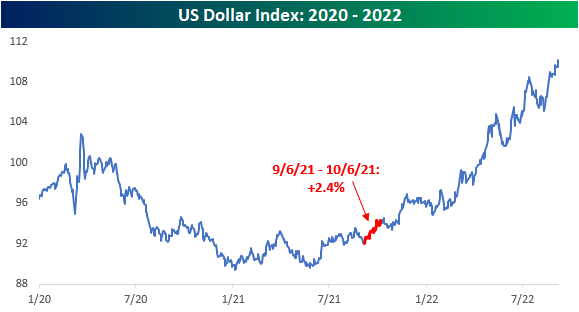