For the first time in nearly twenty years, the US dollar is more valuable that the Euro, as the EURUSD spot cross dropped below parity (1.00) on Monday (8/22). The last time that the euro was trading at this level versus the dollar, the iPhone wasn’t even a glimmer in Steve Jobs’ eye as it was still more than four years away from its debut! The most recent run through parity comes as the Fed hikes rates aggressively, which inherently boosts demand for US dollars as foreign investors seek more favorable yields. As of this writing, the 10-year US Treasury Treasury note yields 3.0%, while the German and French equivalents are yielding 1.3% and 1.9%, respectively. The spreads are even wider for nearer-term maturities. In addition, Europe is attempting to phase out Russian energy exports, which means that the bloc has had to turn to the US as an alternative source. This, too, increases dollar demand. The chart below summarizes the major events that have impacted the Euro since the turn of the century.  It’s been a wild ride!  Click here to start a two-week trial to Bespoke Premium and receive our paid content in real-time. 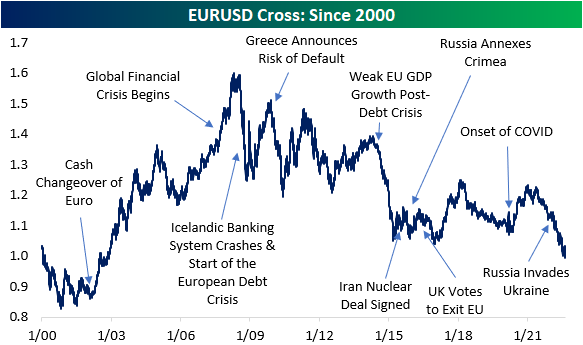 The decline in the value of the euro has wide-ranging effects across the economy.  For US companies with operations in Europe, the stronger dollar makes transactions conducted in euros less valuable. Broadly speaking, though, the S&P 500 Index has essentially no correlation to the EURUSD cross. In fact, on a monthly basis, the correlation since the turn of the century has been -0.19, which implies almost no correlation between the two. Looking at the last ten years, the S&P 500 has surged as the euro has lost value, but from 2003 through the 2007 high, the S&P 500 likewise performed very well even as the euro surged.  While a weaker euro most definitely has implications for a number of individual companies, the broader impact on markets hasn’t been as impactful.  Click here to start a two-week trial to Bespoke Premium and receive our paid content in real-time. 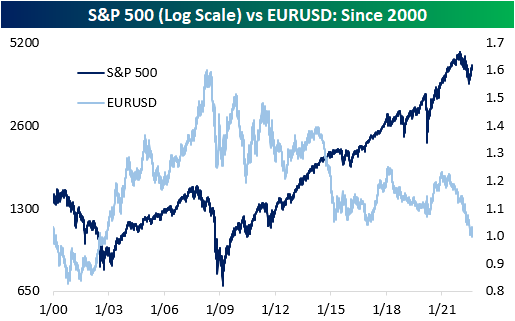