A Dow in Nasdaq’s Clothing

The last two trading days have certainly been out of the ordinary in terms of relative performance between the Nasdaq and the Dow.  Since Friday’s close, the Nasdaq is down 1.2% while the Dow is up 2.2%.  That performance spread of 3.4 percentage points in the last two trading days is the widest gap between the two indices (in the Dow’s favor) since May and then in March.  While there have been two prior occurrences in the last three and a half months, if you take a longer view, this type of short-term outperformance by the Dow has been uncommon.  Before the occurrences in March and May, you have to go all the way back to September 2008 to find the last occurrence and then before that July 2003.

Before 2002 and going back to the late 1990s, there were a number of occurrences on both the way up and even more so on the way down.  Given the market’s performance following the last time we saw a high frequency of periods with similar performance gaps, let’s hope the performance disparity of the last two days doesn’t become a trend. Like what you see? Click here to view Bespoke’s premium membership options for our best research available. 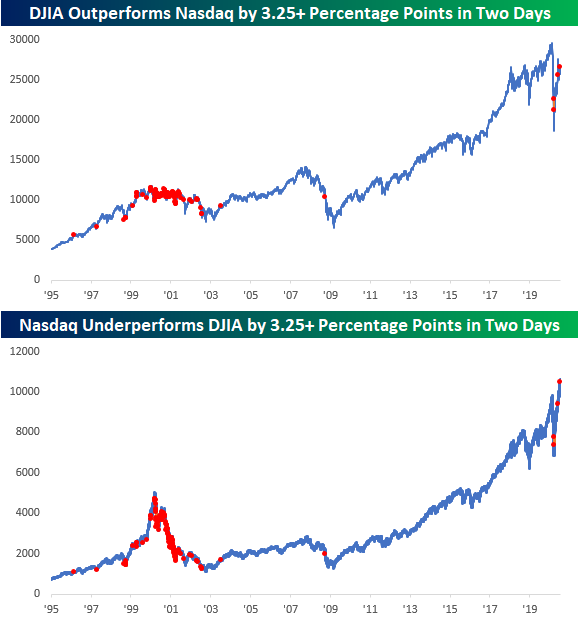