Of all the stocks in the S&P 500, only one has had a positive return every day in 2020: Waste Management (WM). Isn’t it fitting that a company involved in garbage hauling is doing so well in a year where it seems like many of this year’s best-performing stocks came from the trash heap of last year’s worst performers?

WM currently yields around 1.8%, and while that’s not high, it is right in line with the yield of the S&P 500.  WM has also continuously increased its payout over the past 20 years, and with a payout rato of just 44% it has the ability to not only continue to pay shareholders but also grow the dividend.

Up until the final weeks of 2019, WM had been in a downtrend since the late summer when investors rotated from momentum to value names. But in mid-December, it broke out of this downtrend before going on the current run of 15 consecutive up days (including today); the longest such streak in the stock’s history (second chart below). As a result of this winning streak, the stock looks to be on the verge of a breakout with the stock making its first 52-week high since early September. 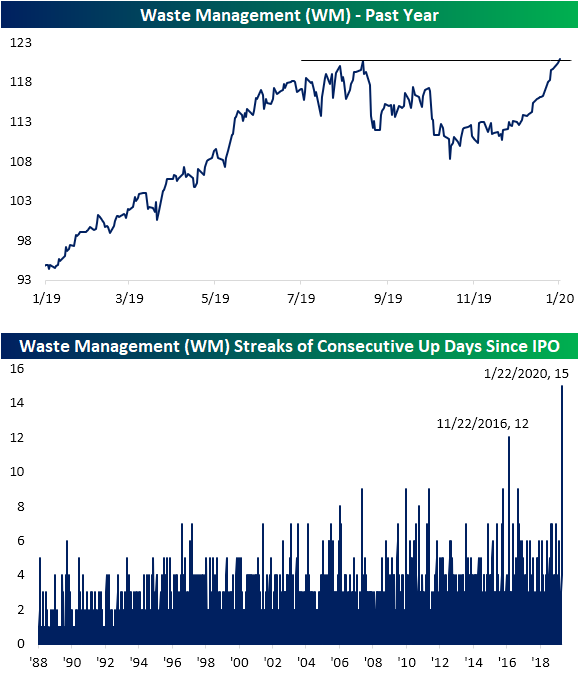 As Waste Management is just beginning to break out, it has seemingly been working at a lag to what is the company’s largest competitor, Republic Services (RSG). Similar to WM, back in August RSG had consolidated around record highs without moving above those levels until the final week in December. Since then, RSG has taken out those prior highs and rallied an additional 5%.  While there is obviously no guarantee that WM will follow in the footsteps of RSG’s breakout, especially as WM currently trades at extremely overbought levels, RSG has set a promising path. Additionally, because RSG has run up more than WM, its dividend yield is lower and its P/E is higher. Start a two-week free trial to Bespoke Institutional to access our Chart Scanner, Trend Analyzer, and the rest of our interactive tools and research. 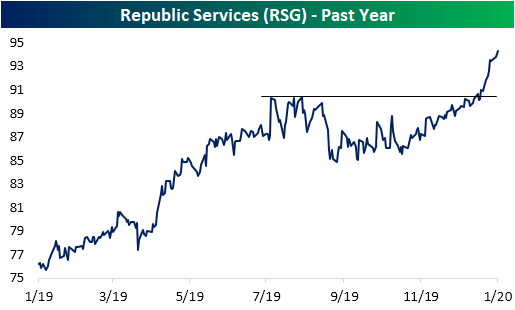