About a month ago, FedEx (FDX) reported disappointing EPS and sales and also lowered guidance. As a result, the stock experienced its second-worst earnings reaction day performance of any earnings day since 2000, falling 12.92%. This morning, another shipping giant, United Parcel Service (UPS), reported their third-quarter results.

In the table below, we show UPS’s earnings results for quarters that FedEx (FDX) has reported a similarly weak quarter to the September report (missed EPS and sales estimates and lowered guidance).  Weak FDX quarters have not necessarily preempted UPS would also disappoint. In other words, one company’s weakness is not necessarily indicative of broader slowing in the logistics space. In fact, in 2005 in the face of FDX’s weak quarter, UPS reported the exact opposite with a triple play, and there was only one occurrence where UPS reported the same type of misses and lowered guidance relative to expectations as FDX.  Otherwise, there was only one other quarter when UPS missed EPS forecasts and three others (including the most recent) when it missed sales.  While UPS didn’t’ necessarily report the same bad results relative to expectations, though, in terms of stock price performance, it has also generally seen weak performance on these days with one-day declines on all but one of the five prior occurrences.

This morning’s report and subsequent reaction have not been strikingly different. UPS’s earnings were a bit of a mixed bag, though were far from as horrifying as FedEx. UPS exceeded EPS estimates of $2.06 by 1 cent as operating profit growth year-over-year topped 20%. Meanwhile, revenues came in $27.4 million below estimates but were up 5% from the prior year. Despite this top-line miss, the company also reported overall domestic volumes were up 9% year-over-year thanks in large part to much higher next-day shipping volumes (up 24% YoY) which is likely a result of online retail. The company also reported that the COO, who was anticipated to be a top candidate for the soon to be available CEO seat, is stepping down. With the good and bad, the stock gapped down 2.26% at the open and remains near those levels as of this writing.

As shown in the snapshot of our Earnings Explorer below, UPS historically has not been the strongest of stocks in reaction to earnings. Of all 72 reports since 2001, the company has beaten EPS and sales only a little better than half of the time, 58% and 53%, respectively.  In response, the stock has averaged a gap down of 22 bps and a full day gain of just 7 bps.  Over the past several quarters there has not been any consistent pattern to how the stock has traded in response to earnings with today’s negative reaction being the worst since April. 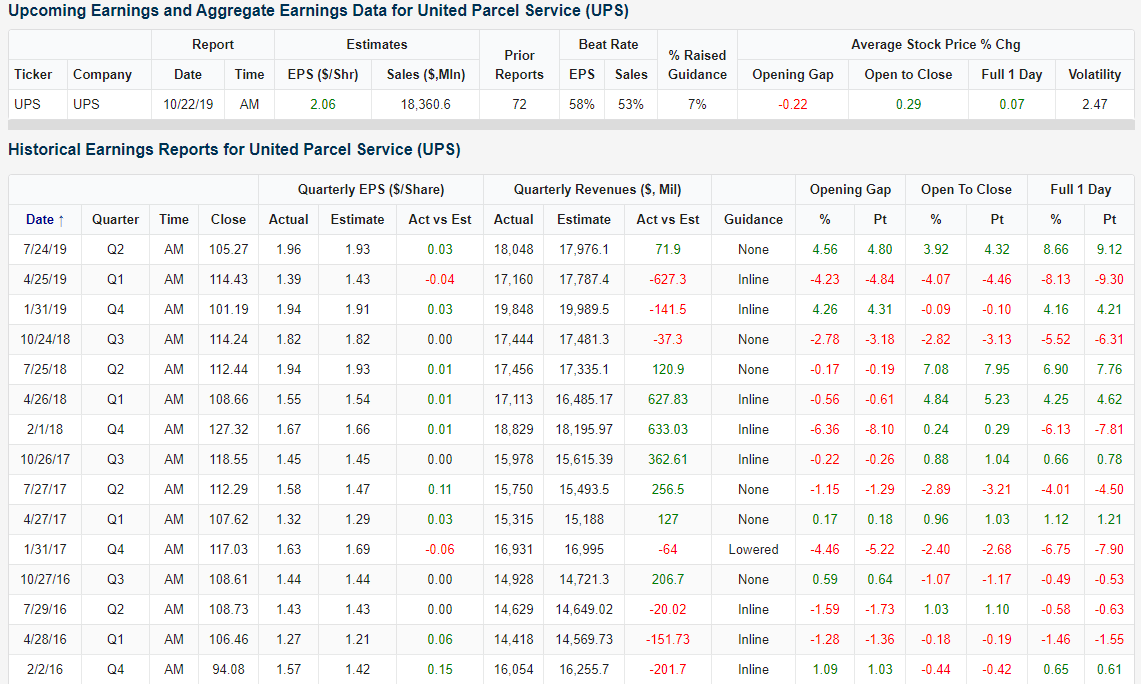 With today’s negative price reaction to earnings, UPS’s chart is still in an uptrend over the past six months and also has a good timing score in our Trend Analyzer tool on account of it teetering into oversold territory. From a dividend standpoint, UPS is also one of the more attractive stocks among the S&P 500 industrials with the fourth-highest dividend yield, behind Eaton (ETN), 3M (MMM), and Nielsen (NLSN).  At 3.37%, the stock yields nearly double the sector average and is also well above the ~1.9% yield of the S&P 500. The company has grown its dividend every year over the past decade and given a payout ratio of 63.5%, it looks to be capable of continuing to do so.  Provided the stock holds above support between $110 and $115, the stock is an interesting option for income-oriented investors. Start a two-week free trial to Bespoke Institutional to access our Earnings Explorer, Trend Analyzer, and much more. 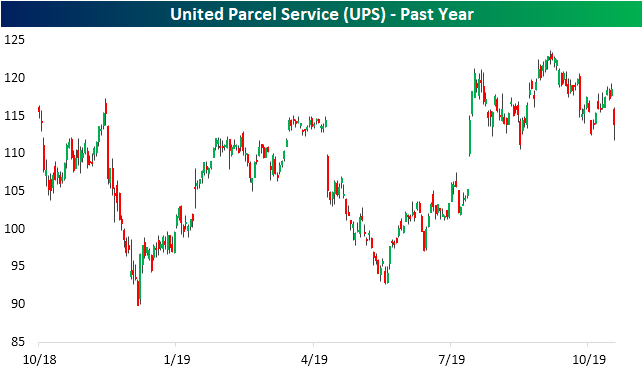