The Dividend Aristocrats (ETF: NOBL) is an index made up of 57 S&P 500 stocks that have long histories of increasing their dividend payments to shareholders. In fact, each of these companies has raised their dividend for 25 consecutive years or more; some have even been growing their dividends twice as long. After a sharp rally at the end of August through mid-September which brought the index up to all-time highs, the group fell back below its prior highs at the start of the month.  Having fallen further since then, NOBL now sits at the bottom of its long term uptrend. 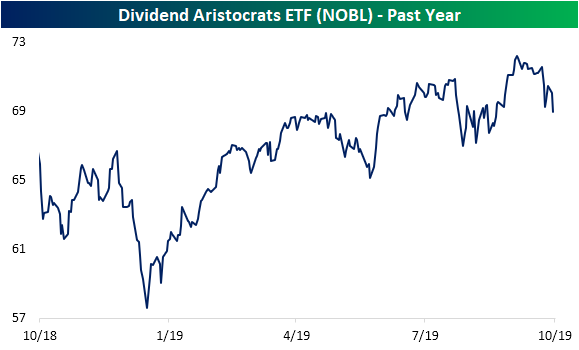 Below is a list of the 20 Dividend Aristocrat members with the highest yields.  A large portion of the top 20 are Health Care and Consumer Staples stocks (each sector having 5 of the 20) with Industrials also having a sizable contribution (4 stocks) to the highest yielders.  Currently, there are three stocks that yield over 5% including Exxon Mobil (XOM), AT&T (T), and AbbVie (ABBV).  AbbVie (ABBV) — which was spun off from Abbott Labs in 2013 — tops this list with a yield of 5.8%.  Even though the stock has been in a downtrend over the past year, it has still increased its dividend. Multiple other stocks in this group including Franklin Resources (BEN), 3M (MMM), and Johnson and Johnson (JNJ) are also in downtrends.  Meanwhile, others such as Coca-Cola (KO) are in uptrends. We created a custom portfolio of all the dividend aristocrats for members so that they can keep tabs on the trends of these stocks. Some other notable high yielders include People’s United Financial (PBCT) and Leggett & Platt (LEG). These two have some of the highest yields in spite of also having the third smallest and smallest market caps, respectively, of all 57 dividend aristocrats. JNJ, on the other hand, has the largest market cap of all aristocrats.

While ABBV (formerly Abbott Labs) has the highest yield of the top 20, it does not have the longest track record of growing its dividend even though it has been doing so for nearly 50 years.  Genuine Parts (GPC) actually holds that accolade having raised its dividend for 63 consecutive years. Of the other top 20, 3M (MMM) and Emerson Electric (EMR) are the only other stocks to have done so for 60 years or more.  A few others like Johnson and Johnson (JNJ), Federal Realty (FRT), and Coca-Cola (KO) have grown their dividends for better than a half-century.  Start a two-week free trial to Bespoke Institutional to access our custom portfolios, Trend Analyzer, Chart Scanner tool, and more. 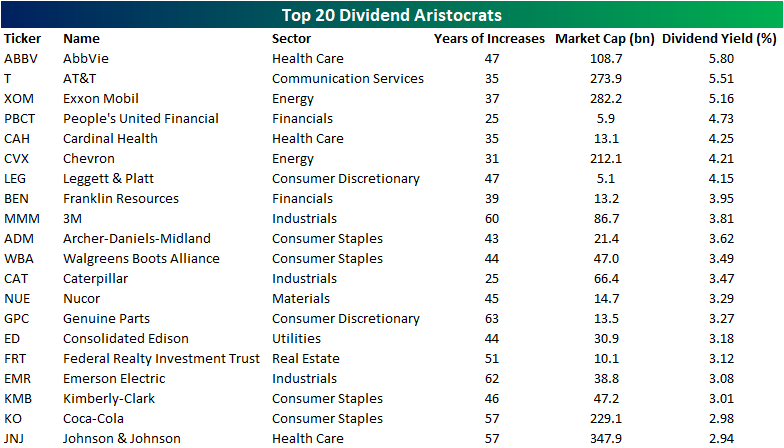