About three weeks ago, Texas Instruments (TXN) reported a weak quarter with EPS and sales both below estimates alongside lowered guidance, a reverse triple play.  In response, the stock dropped sharply the following day (October 23rd) with a decline of 7.48%.  That was the largest decline on earnings since October of last year when the stock fell 8.22% and was the seventh-largest decline on earnings for all quarters since 2001.

While that decline may sound worrying, it is important to take seasonality into account.  The third quarter earnings report has by far been the weakest in terms of the stock price reaction for Texas Instruments.  In response to all third-quarter earnings report since 2001, TXN has only risen 31.6% of the time; averaging a full day decline of 2.21% the day after the report.  That is the only quarter that has averaged a decline. 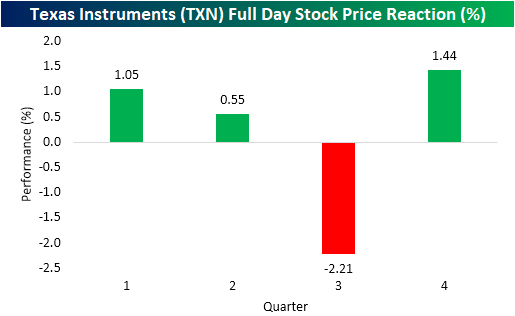 Regardless of seasonality, that massive decline on earnings did some technical damage to TXN, but not all was lost. The gap down sent TXN collapsing through its 50-DMA from which it has yet to retake. Fortunately, TXN found support right around the late April highs at ~$116, and the stock has not moved below the price from that gap down on earnings ($115.91).  In other words, things have not gotten worse since that initial decline on October 23rd.  In fact, TXN has been grinding higher along a longer-term uptrend line.

Adding to the attractiveness of Texas Instruments is a solid dividend currently yielding over 3%. That is the fourth-highest yield of all S&P 1500 semiconductor stocks.  Not only is this a higher yield than other stocks in the industry, but the dividend also has an extensive history.  The company has paid shareholders uninterrupted for every quarter since it was first declared in 1962. Texas Instruments has also grown the payout for each of the past 15 years. While some other high yielders in the space like Intel (INTC) or Broadcom (AVGO) may have a lower valuation on a price-to-earnings basis, the dividends do not appear to be as safe as the payout ratios top 90%.  TXN on the other hand only has a payout ratio of 50.8%.  This means the safety of TXN’s dividend appears much more intact than its competitors. 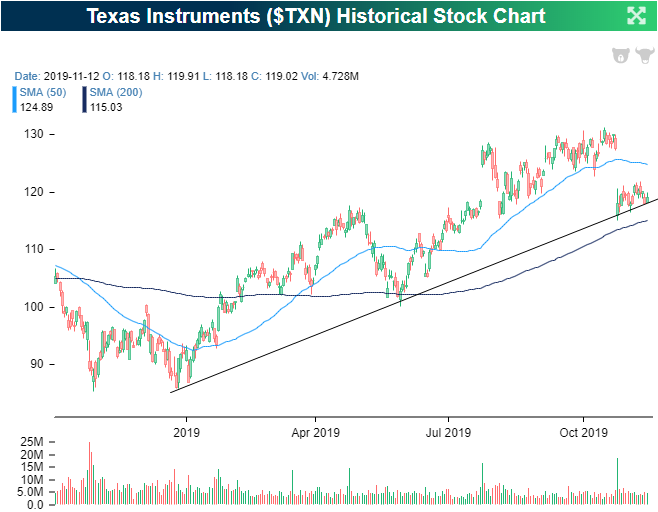 TXN has been a bit of a black sheep amongst the semis.  Other quarterly reports this earnings season were strong, including triple plays from major players: Intel (INTC), Qorvo (QRVO), and Taiwan Semiconductor (TSM).  Price action amongst other semis has similarly been stronger than TXN as well. As shown in the charts of other large-cap semiconductor stocks taken from our Chart Scanner, across the industry there have been several breakouts.  In other words, even though TXN has lagged the rest of the sector recently, it is not as though the picture of the entire space is in bad shape.  Start a two-week free trial to Bespoke Institutional to access our full library of reports and interactive tools.