While equities have continued to rally in the new year, conditions have gotten a bit extended as every one of the major US index ETFs was more than two standard deviations above their 50-DMAs at the end of last week. Taking another look at just how overbought conditions have gotten, of the S&P 500 stocks, over 25% currently have a 14-day RSI reading above 70. That is the highest reading by this measure since late February of last year. 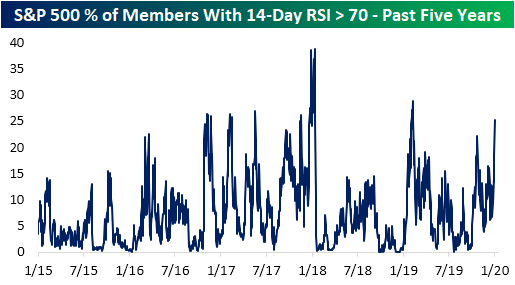 Although stocks are generally overbought, there are still some to be found that are not running as hot. One such group is the Telecommunication Services group. Of the S&P 500 stocks in this group—Verizon (VZ), CenturyLink (CTL), and AT&T (T)—each one has pulled back within its respective trading range recently and have begun to bounce from the bottom of their uptrends as shown in the charts below.  Today, each one of these stocks has also crossed back above their 50-DMAs. Given this, these three stocks have also earned a good timing score in our Trend Analyzer tool.

In addition to being attractive from a technical standpoint, the valuations are also relatively cheap.  Stocks in the Telecom Services group reside in the broader S&P 500 Communication Services sector, which has a price-to-earnings ratio of 23.5. But for VZ, CTL, and T, the P/E ratios are 16.3, 11.6, and 10, respectively.  Not only are those lower than the sector’s P/E ratio , but for CTL and VZ, that is in the 13th and 11th percentile of the past decade’s readings, respectively.  Although the P/E is still fairly low, the valuation for T is not quite as significantly low as its current P/E ratio is in the 75th percentile of the past ten year’s range.

Additionally, this is a group of high yielders paying a dividend at least twice the size of the 1.88% dividend yield of the S&P 500. In fact, currently yielding 7.37%, CenturyLink (CTL) has the third-highest dividend yield of all S&P 500 stocks. The payout ratio for CTL is a bit high at 88.8%, but it could also be worse. AT&T has the 14th highest dividend yield of 5.47% but has an elevated payout ratio of over 100% meaning further ability to pay its dividend as well as grow it would come more into question for this stock holding the earnings picture constant.  On the other hand, while not one of the largest dividends, VZ’s yield is still generous at 4.13% while the payout ratio is the most palatable of the bunch at just 49%. Start a two-week free trial to Bespoke Institutional to access all of our research and interactive tools. 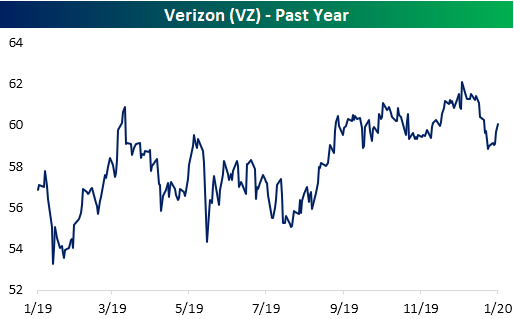 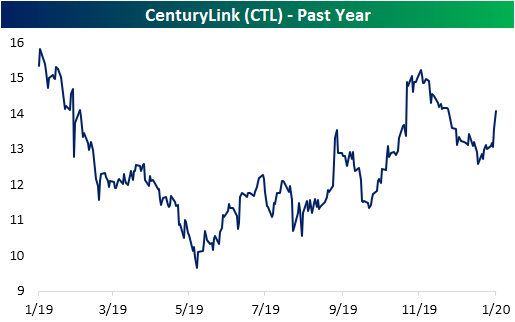 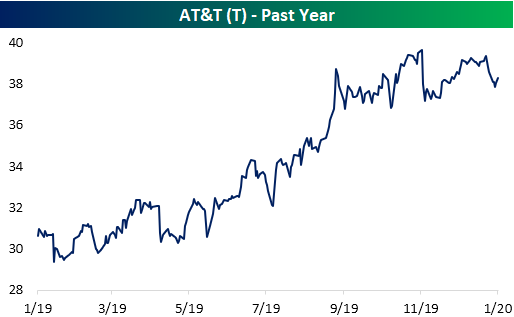