Earlier today we updated our weekly Bespoke Stock Scores database, which takes a “fusion” approach to ranking every stock in the S&P 1500.  Each stock gets a fundamental ranking, a technical ranking, and a sentiment ranking.  These three scores are then combined to form our overall Stock Score.  This week, State Street (SST) came in with the highest overall score for a second week in a row.  The company’s current fundamental picture is attractive with a solid valuation relative to its S&P 1500 peers in the Capital Markets industry. The company’s PEG, P/B, P/S, and P/E ratios are all lower than those of similar companies.

In addition to strong fundamentals, State Street’s technicals also played into its high score these past couple weeks. Over the past two years, STT has remained in a downtrend off of its January 2018 highs.  But the stock bottomed out in August around $48, finally breaking this downtrend later in the fall.  The stock has gone on a significant rally in the time since having risen nearly 60% off of the August low through today.  Given this strong run over the past few months, in recent days STT has experienced a bit of mean reversion after reaching extremely overbought levels (over two standard deviations above its 50-DMA).  As shown in the chart below, this was the first major pullback for the stock since September/October but it has also provided a more opportune entry point. In fact, the stock currently has a “good” timing score in our Trend Analyzer.

In addition to the high stock score based on these metrics, adding to STT’s attractiveness is a high dividend yield which recent declines in the stock price have lifted to 2.71%.  While not the highest yield, it is larger than the 2.27% yield of the overall Financial sector. Given the payout ratio remains very healthy at 29.7%, the company has plenty of room to continue to grow this dividend as it has every year of the past couple of decades outside of the Financial Crisis (2008-2010).  Start a two-week free trial to Bespoke Premium to access our research platform, which includes our weekly Stock Scores rankings and much more. 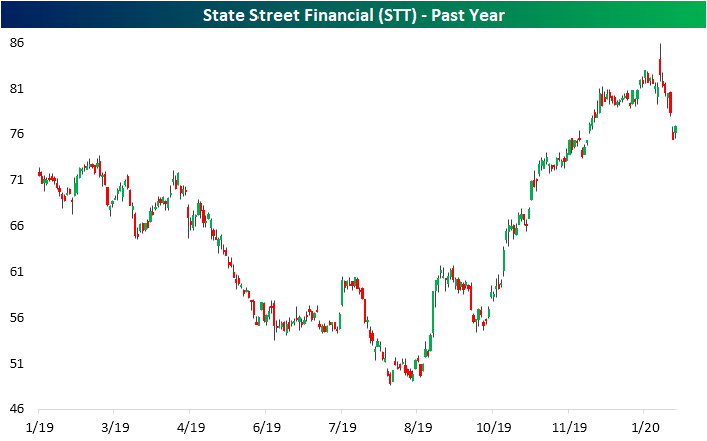