Given the lower prices of stocks, dividend yields have been on the rise over the past couple of weeks.  The dividend yield of the S&P 500 now stands at 2.12% which is the highest since June 3rd of last year when it reached the same level, but only stayed there for a single day. Prior to that, yields were only higher during the Q4 2018 sell-off through February of 2019. At the beginning of the current sell-off on February 19th, the S&P 500’s yield was 26 bps lower at 1.86%. 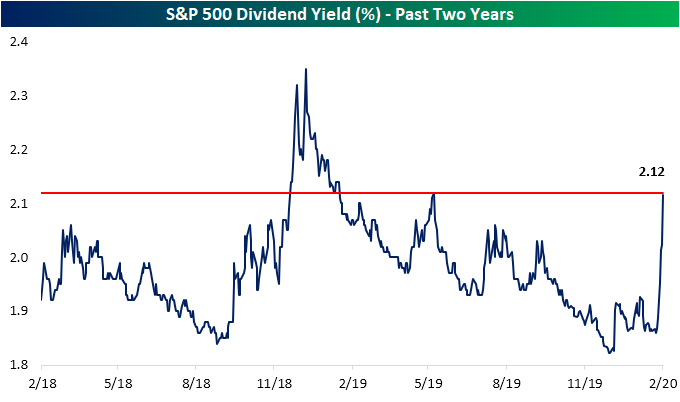 Of the individual stocks in the index, there are now 81 stocks that have dividend yields of 4% or more. That compares to only 64 at the beginning of the sell-off.  In the table below, we show the 25 highest yielders of the S&P 500 as well as the price change and change in the dividend yield since the 2/19 record high.  As shown, there is only one stock, Macy’s (M), that yields over 10% at the moment.  This major retailer has fallen out of favor in the past few years but the stock has gotten crushed since the 2/19 market peak having fallen just under 21% in that time.  That decline has raised the dividend yield by 2.44 percentage points, but there is one other stock that has seen its yield increase by even more. That stock is Occidental Petroleum (OXY), the second-highest yielder in the index (9.93%). Being an Energy name, OXY has fallen the most dramatically (-29.05%) since 2/19 of all the highest yielders. 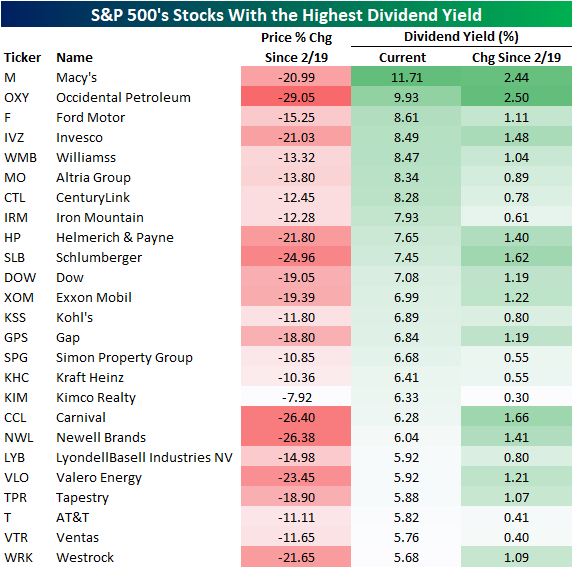 While there is a lot of overlap, in the table below we show the stocks that have seen their dividend yields rise the most as stocks have declined since 2/19.  Again OXY and M top the list. While no other stocks have seen their dividend yields increase by more than 2 percentage points, there are another 17 who have risen by at least 1 percentage point.  Notably, two cruise line stocks, Carnival (CCL) and Royal Caribbean (RCL) find themselves on this list.  Carnival (CCL) now yields 6.28% while Royal Caribbean (RCL) yields 4.05%.  Start a two-week free trial to Bespoke Institutional to access our Dividend Income Model Portfolio as well as our full range of research and interactive tools. 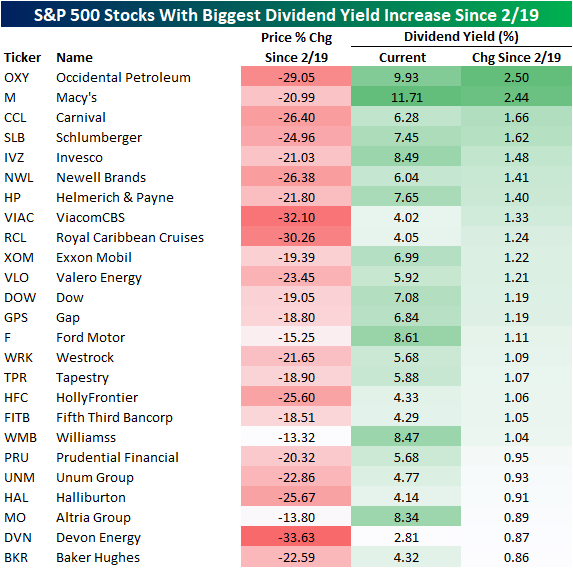