One of the world’s largest packing product companies, Sonoco (SON)—not to be confused with major gas station brand Sunoco (SUN)—had a bit of a rough third quarter. Declining just over 10% in this time, the stock fell to the lower end of the past few years’ uptrend channel; taking out both the 50 and 200-DMAs in the process. Since mid-August, though, the stock has rounded out a bottom and has moved back above the 50-DMA. This also coincided with a support level that shares with the highs from around this time of year in 2018. In other words, while the shorter-term trend has been somewhat weak, the longer-term technicals have held up just fine.

SON’s dividend also helps its attractiveness.  SON currently pays 2.94%, which is 50 bps more than the average for other Materials sector stocks in the S&P 1500.  While somewhat high, the payout ratio is at 55.15%, meaning there is some security in the dividend by that metric. But that is not taking into account the fact that the company has been paying, and growing, its dividend consistently since the mid-80’s. Back in the spring, SON raised its quarterly dividend again from $0.41 per share to $0.43.  That means for every 100 shares ($5,818), you’ll get $172 in dividend income per year from SON.  That’s nearly twice the $96 you’d get per year from the same $ investment in the 10-Year Treasury. 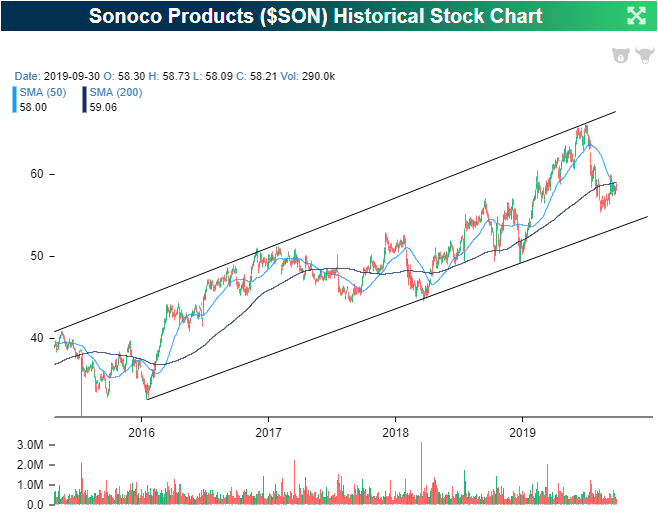