Health Care has had a lack-luster year with the worst YTD performance of the 11 sectors.  Pfizer (PFE) has been a prime example of this. The stock had been in a long term uptrend over the past several years, and after a big move higher in early 2018, 2019 has been another story. After a few lower lows over the past year, the stock fell dramatically in August in response to disappointing earnings. Although the damage has been done in regards to the near term technical picture, the longer-term uptrend is still in place.

Additionally, from a dividend-focused point of view, it is one of the best in the Health Care sector.  This recent drop sent the yield much higher. At just a hair under 4%, PFE currently has the third-highest dividend yield of all S&P 500 Health Care stocks. Additionally, the company has raised that dividend consistently over the past decade. Even with that high yield, the dividend payout ratio is only at 39% meaning the company has the earnings to cover or even raise its payout.

In a post in late August, we highlighted PFE’s massive decline in response to its last earnings report which led the dividend yield to spike higher. In turn, the yield drastically distanced itself from the yield on another major Dow Health Care stock, Merck (MRK). Since then, given the price has yet to move back to where it previously was, PFE’s yield continues to be much higher than that of MRK.  Though it is off its recent high, the difference between the two stocks’ yields is right near the highest levels of the current cycle. Start a two-week free trial to Bespoke Premium to access our most actionable equity market research. 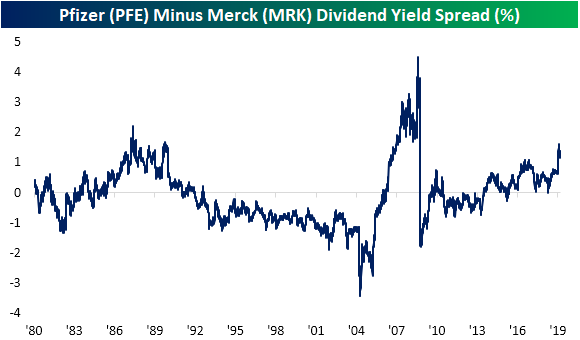