Stocks got a shot in the arm at the end of last week thanks to the Nonfarm Payrolls report. As we discussed in Friday’s Bespoke Report, although the headline number missed expectations, the report’s data showed strength in other labor market metrics such as the employment-population ratio and wage growth.  With its business closely tied to the labor market as a payroll and HR solutions provider, the second-largest payroll accounting firm behind only Automatic Data Processing (ADP), Paychex (PAYX) outperformed on the day with a 2.17% rally. More significantly, this rally helped to lift PAYX out of a downtrend that has been in place since June.  It was also the first time that the stock closed in overbought territory (at least one standard deviation above its 50-day moving average) since June.

In addition to the more positive technical set-up, PAYX has an attractive dividend that currently yields 2.98%.  That is a much larger yield than other stocks in the Software and Services industry group, averaging 1.7%, and the broader S&P 500. The yield for PAYX’s closest comp, Automatic Data Processing (ADP), is nearly a full percentage point lower at 1.99%.  Though they have much smaller market caps, other comparables including Paycom Software (PAYC) and Paylocity (PCTY) do not pay a dividend. In terms of security, PAYX has a long history of paying a dividend going back to 1988 and has paid shareholders for each quarter consecutively over the past five years. The dividend has grown 63% (from $0.38 in 2014 to $0.62 last quarter) in this time.  The first two quarters of 2013 did not see a dividend declared but this was the only time this happened in the past three decades.  The payout ratio is currently 84.15%, which is somewhat high but in line with the average for the ratio over the past ten years. The next payout is expected to be declared on October 10th at $0.62 per share. 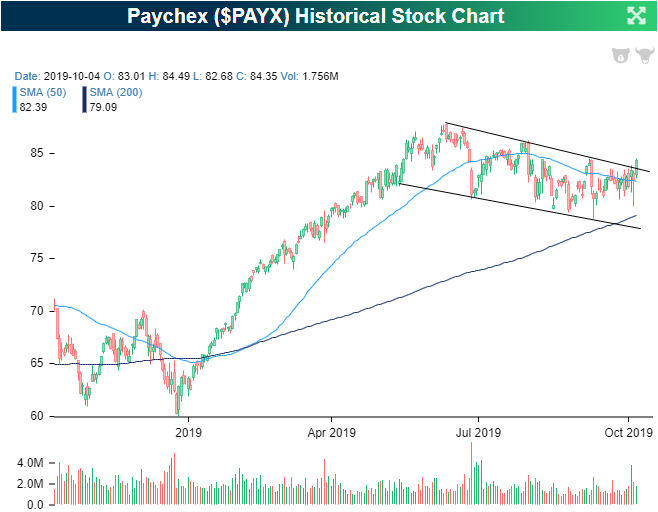 Moving back to technicals, below are price charts of PAYX’s competitors.  While PAYX managed to break its downtrend on Friday, none of these did and they’re still well off their recent highs. Start a two-week free trial to Bespoke Institutional to access all of our research including our interactive tools. 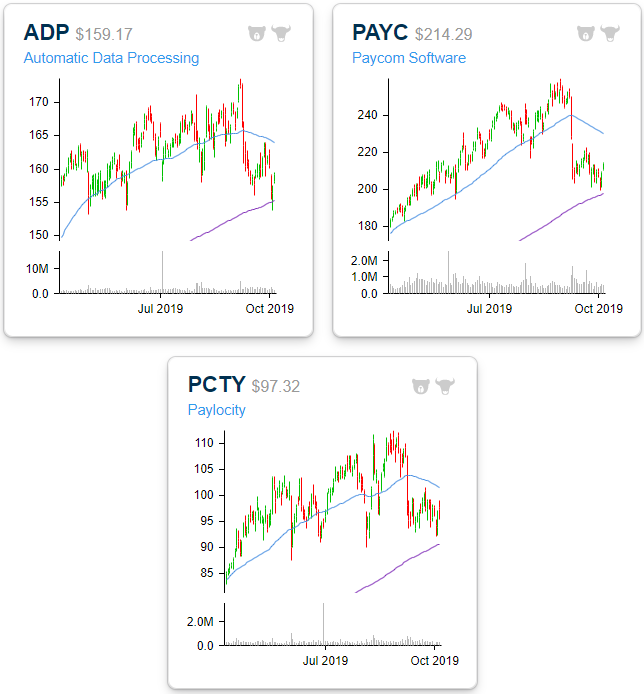