Legget & Platt (LEG) manufactures a wide array of home and automobile furnishings. The stock had a banner month in October, notching a 25.3% gain; the fourth-best performer in the S&P 500 in October behind Align (ALGN), Tiffany & Co. (TIF), and Biogen (BIIB), which rose over 39%, 34%, and 28% respectively. As with many of the other top performers last month, earnings gave a considerable boost to the rally.  Reporting better than expected EPS and sales on in-line guidance, the stock rose 11.72% in response to earnings on October 29th. That was the company’s third best stock price reaction to earnings since at least 2001.

Seeing as earnings came out at the end of the month, it obviously was not the only factor playing into LEG’s massive October rally.  Technicals were also a key factor.  The stock had been in a long term downtrend since the summer of 2017, but that trend was broken mid-October headed into earnings. The move on earnings allowed the stock to reach another technical milestone as it took out the previous all-time highs around $50.  Since then, the stock has managed to continue its run higher given this catalyst.  Month to date, LEG has just about risen another 6%.

Fortunately, this rally has not eaten into the dividend in a detrimental way as LEG still yields 2.94%.  That is a larger yield than the S&P 500 as well as the average for other Consumer Discretionary stocks.  Adding to the attractiveness, the dividend has historically been safe as the 136 year old company is a Dividend Aristocrat having grown its payout for the past 47 consecutive years. Given the current payout ratio of 54.2% and Net Debt to EBITDA of 3.16, the company should remain capable of paying its shareholders looking forward. 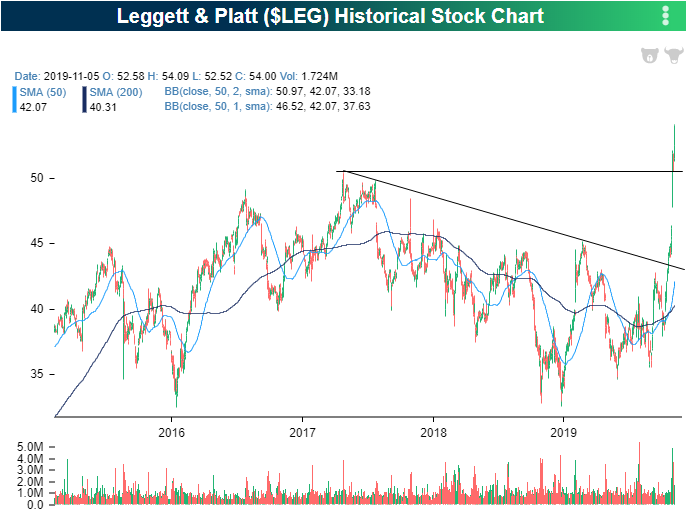 With that said, the recent move has brought the stock to very elevated levels meaning a pullback would provide a preferred entry point. The stock now trades at a premium to its peers at 19.91x earnings compared to the Household Durables industry average of 13.76x.  From a more technical perspective, yesterday’s close brought LEG to the most extended level above its 50-day moving average (over 28% above the 50-DMA) in the last 30 years as shown in the first chart below.  Additionally, the 14-day RSI helps to show just how strong momentum has been as LEG has hovered around 86 for most of the past week.  The last time this indicator was around similar levels was January of 1992. Typically, readings of this indicator over 70, let alone readings over 80, mean shares are very overbought. Overall, in addition to it having an attractive dividend, the technical picture has rapidly improved for LEG over the past month but given how hot the stock has run, some sort of mean reversion should be expected in the near term.  Sign up for Bespoke’s “2020” special and get our upcoming Bespoke Report 2020 Market Outlook and Investor Toolkit. 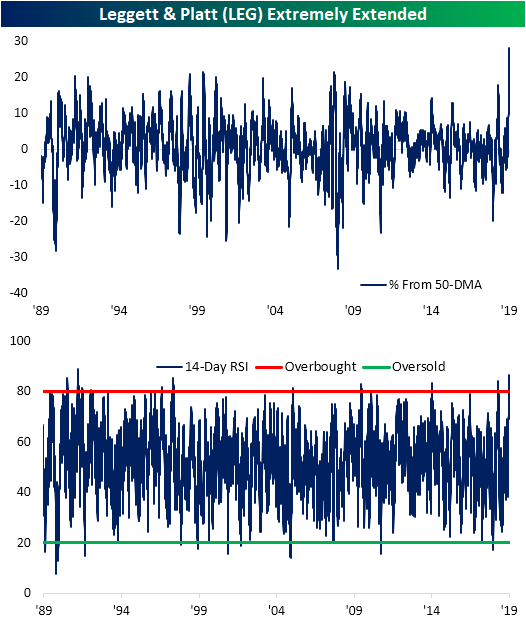